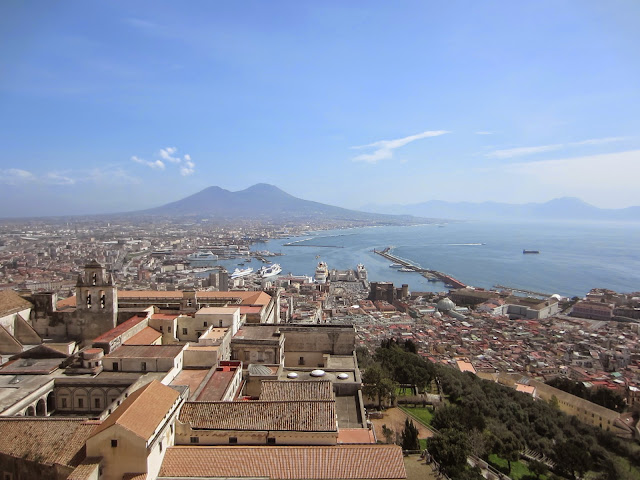 We arrived in Naples fully briefed thanks to a chance meeting with Fiorenza, a young woman we met on the train from Rome. 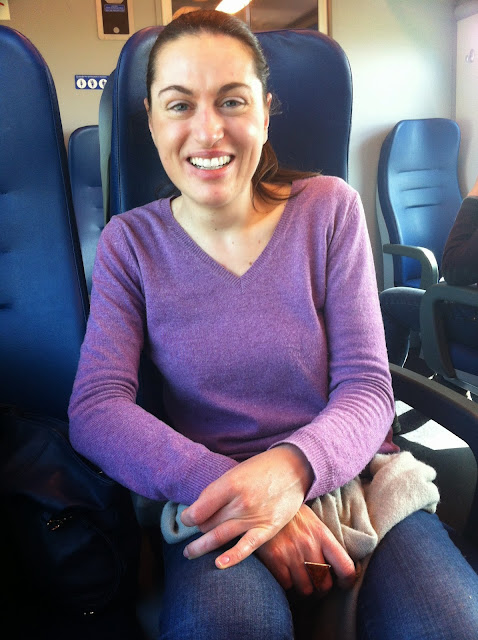 Fiorenza was catching the train to her family's home between Rome and Naples.  She had spent several years in Naples while at university and during that time, she'd come to love the city.  The train trip with Fiorenza passed in the blink of an eye as she gave us her recommendations for where to eat, what to see and the areas to avoid.  Her main recommendation was to enjoy exploring the streets "because in Naples, that's where everything happens". 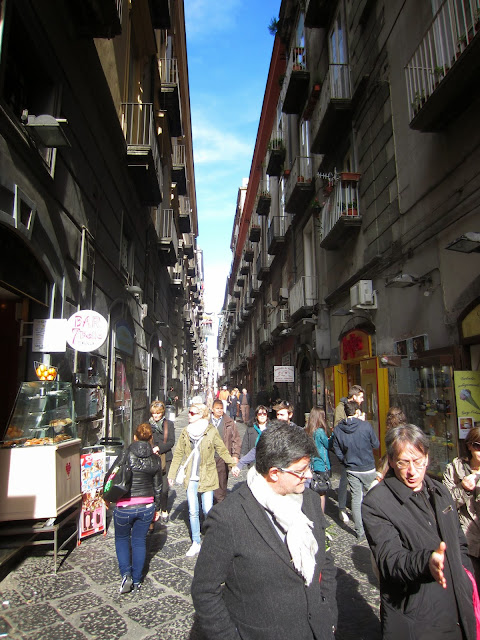 We followed Fiorenza's recommendation and spent lots of time wandering the noisy, bustling, chaotic, and sometimes dirty, streets of Naples.  What we found was a city bursting with life, laughter and music. 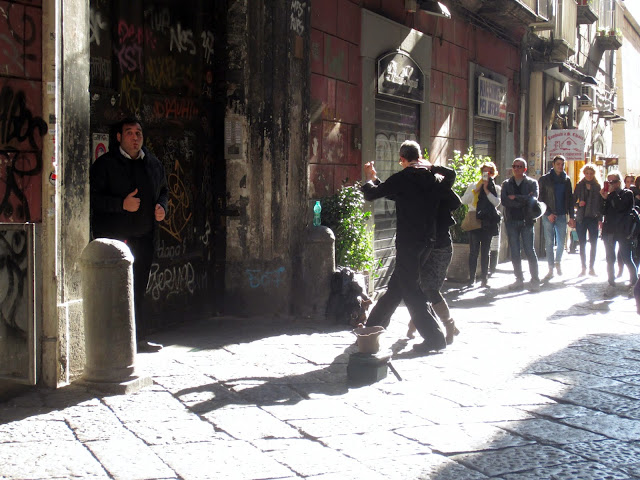 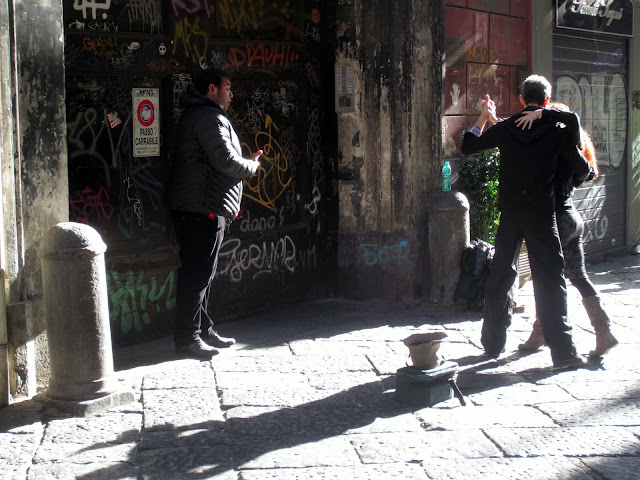 From a long way down one street we heard the majestic voice of a tenor, long before we saw him. Then, as we stopped to listen a young couple stepped out from the crowd and began to dance. 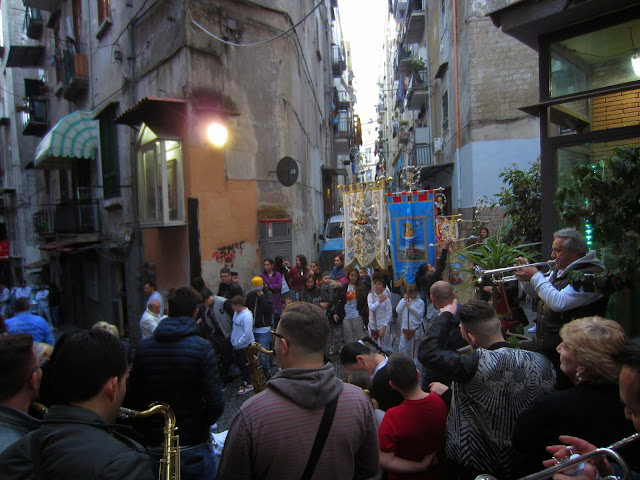 Later, from the window of our apartment we heard a brass band.  We dashed down to join the crowd lining our narrow street.  They stood in silence as the young children solemnly lay themselves on the road forming a guard of honour for the religious procession. 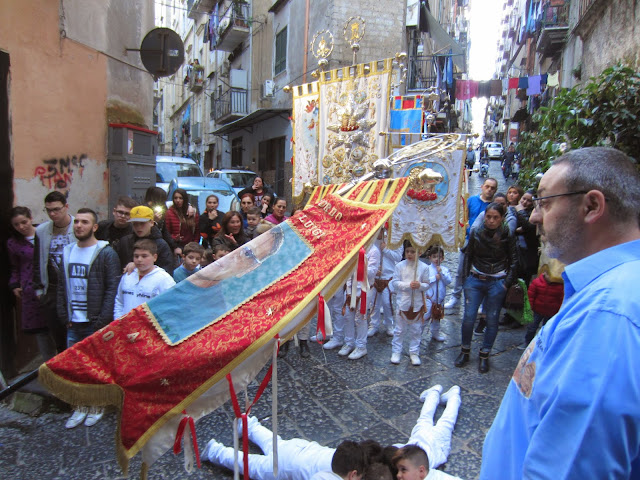 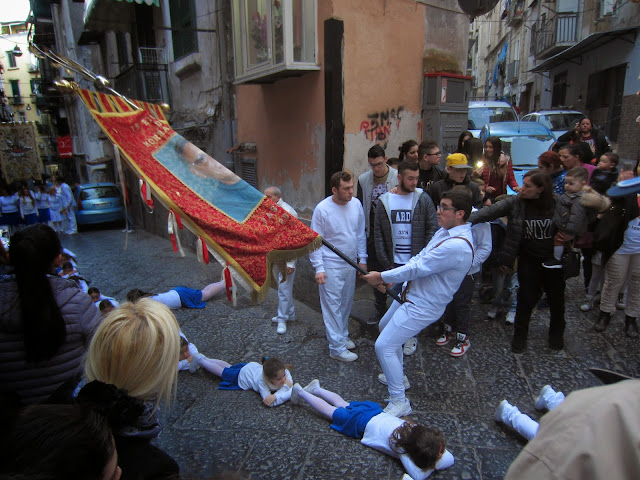 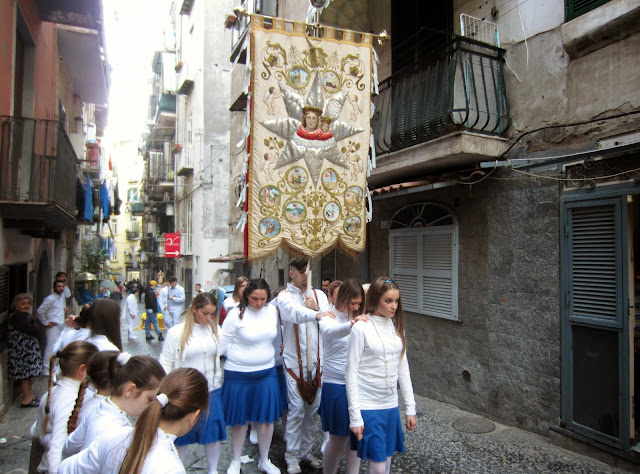 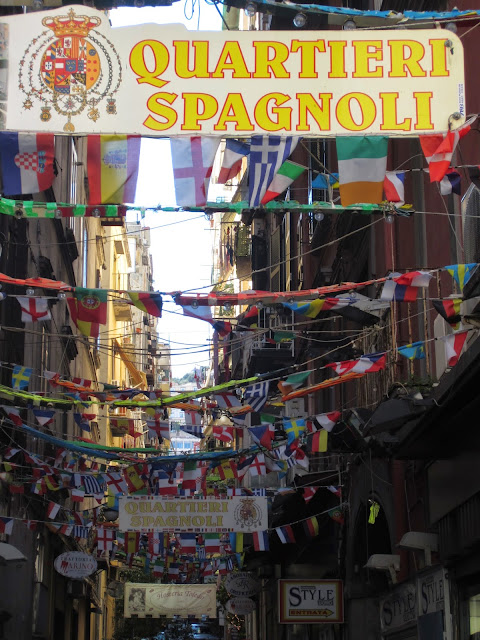 Our apartment was in one of the oldest, most central and, unknown to us,  most notorious areas of Naples, the Quartieri Spangoli.  Fiorenza had warned us that it was one of the areas of Naples to avoid at night, but when we spoke with her on the train we didn't realise that our apartment was on the edge of this working-class neighbourhood.  The Quartieri Spangoli is full of narrow, dark lanes where washing decorates the streets and children play, dodging cars and Vespas as they kick their soccer balls. 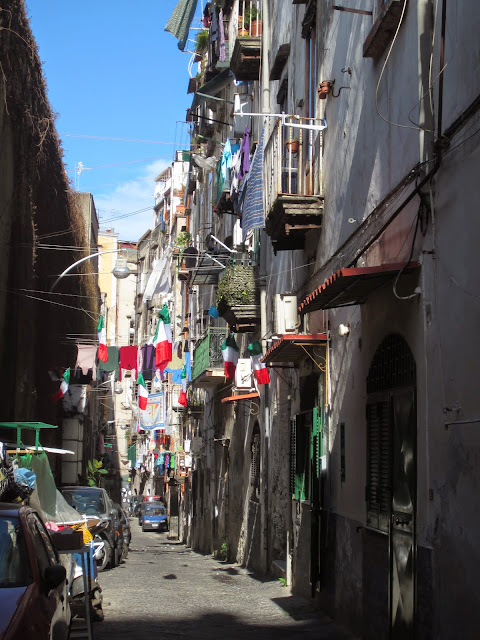 It is also the area where we ate fresh, delicious seafood while seated right on the street, of course, with the noise of motorbike mufflers serenading us at only an arm's length away. 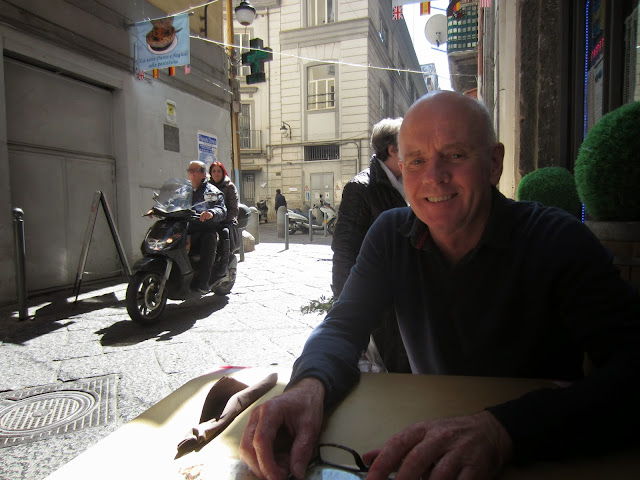 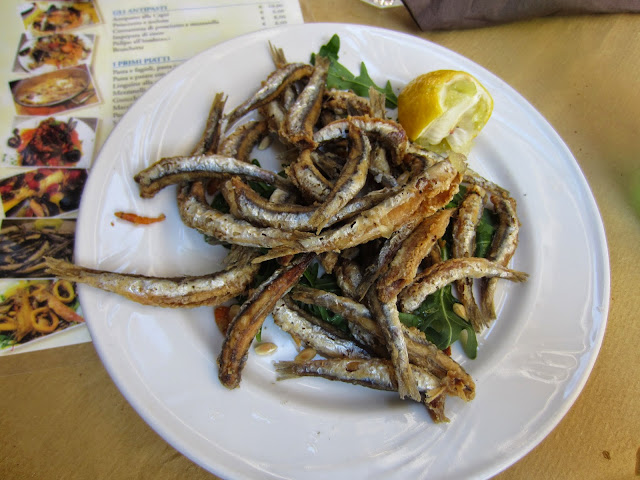 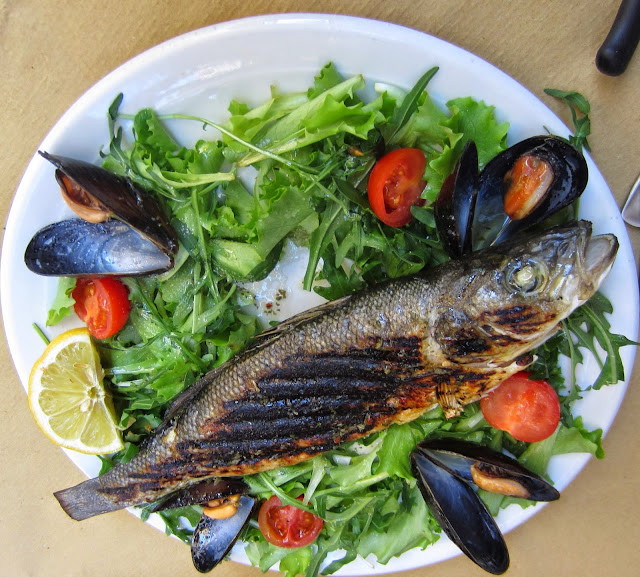 And of course we ate pizza. 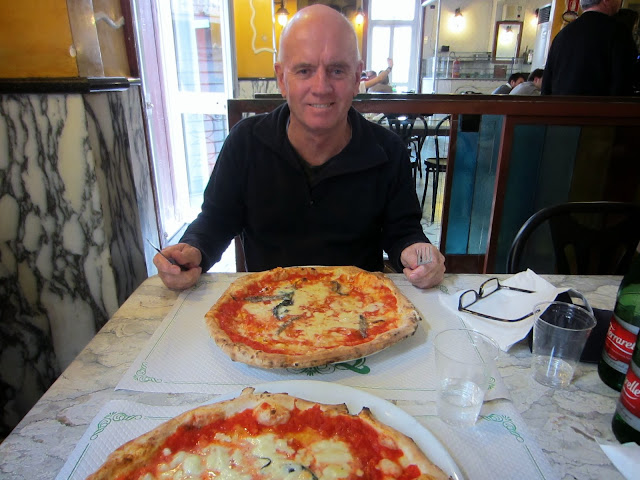 We discovered that while the pizza was memorable, especially the Napoletana topped with buffalo mozzarella, not all the street food of Naples is delicious. 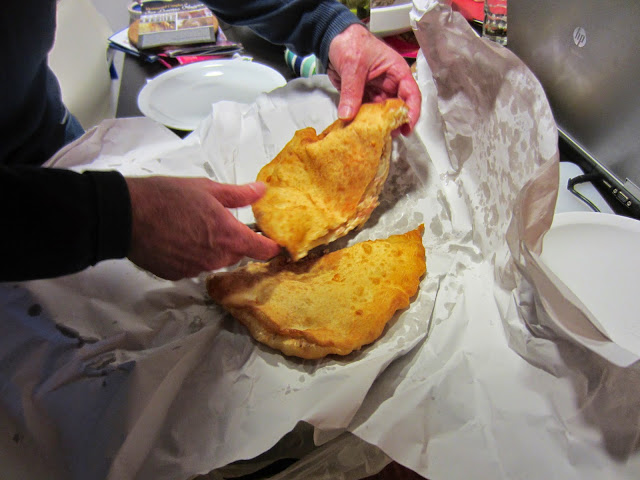 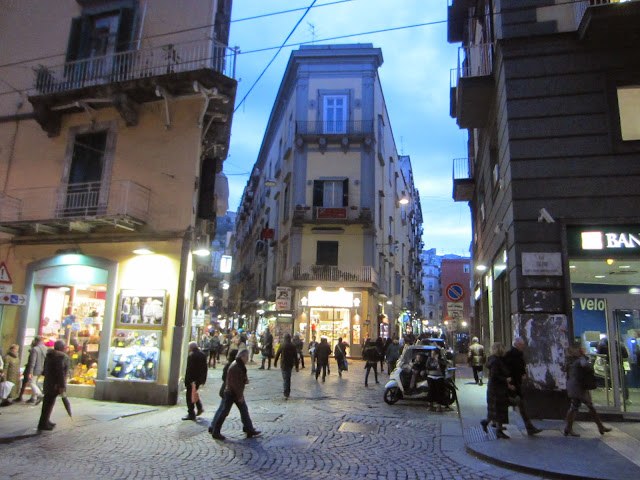 What we didn't expect to find in Naples were pockets of elegance and serenity.  One afternoon retreating from the noise of the busy shopping piazza, I stepped into the quiet of a cafe for a quick hit of coffee and a spectacularly fresh sfogliatelle.  Naples' reputation for the best cakes in Italy is well deserved. 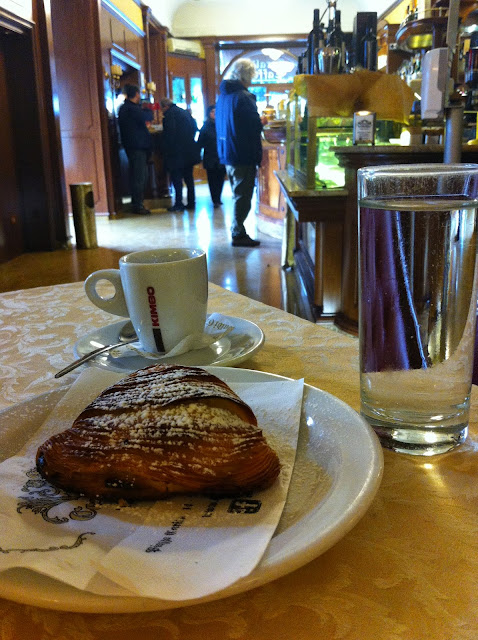 Another peaceful afternoon was spent enjoying the museum and cloisters garden behind the much loved church of Santa Chiara.  While Stefano looked at one more ancient marble statue, I joined many other tourists basking in the quiet spring sunshine. Coats off, if only for a few minutes. 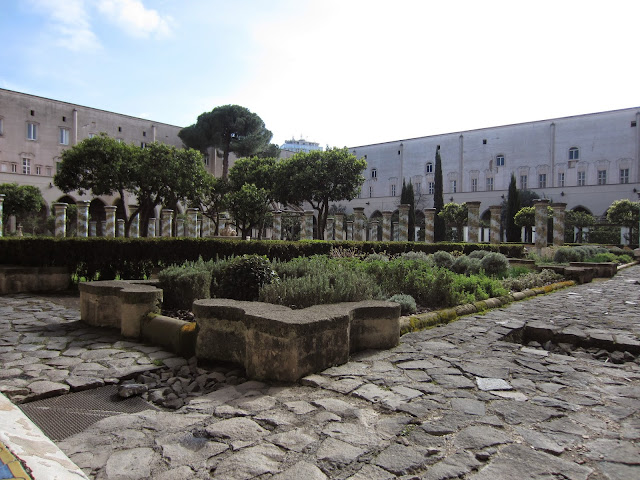 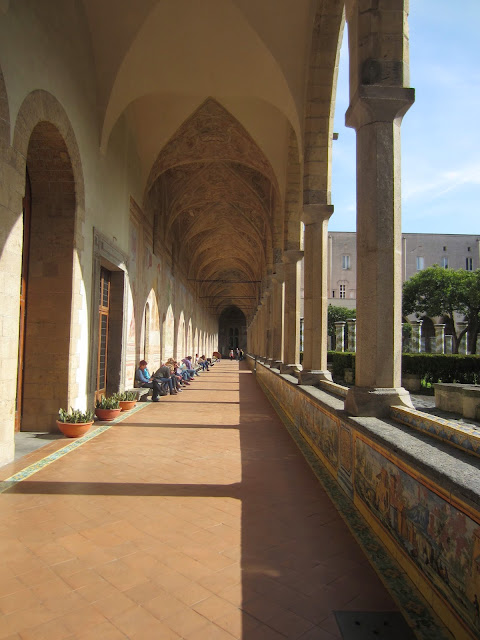 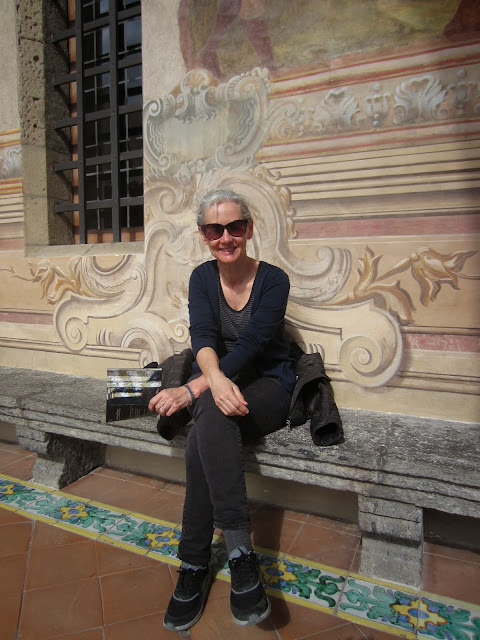 As we left the peaceful gardens of Santa Chiara we noticed a poster on the street outside advertising a concert for the following night.  Miserere. Liturgia popolare della settimana santa.  Although we were unsure about the concert, the men preparing the small church/theatre were genuinely enthusiastic so we reserved tickets for the following evening with the inkling that it might be something special.  It turned out to be an evening of traditional folk music and it was one of the highlights of our stay.  It reminded us that Naples is a city of contrasts. 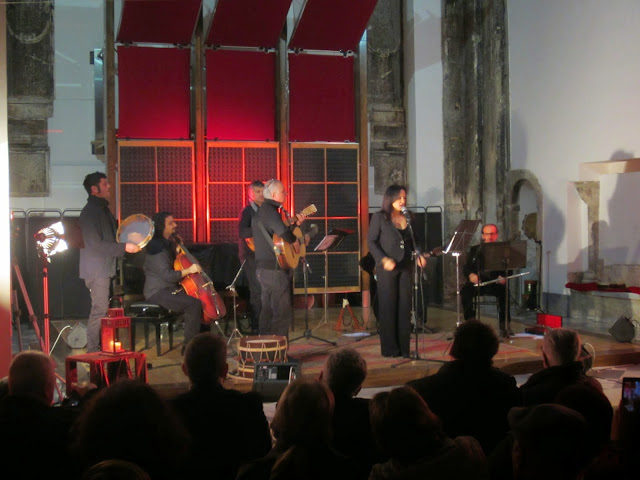 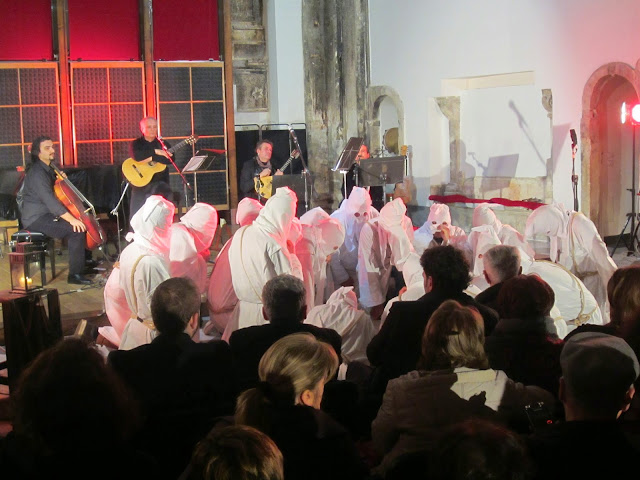 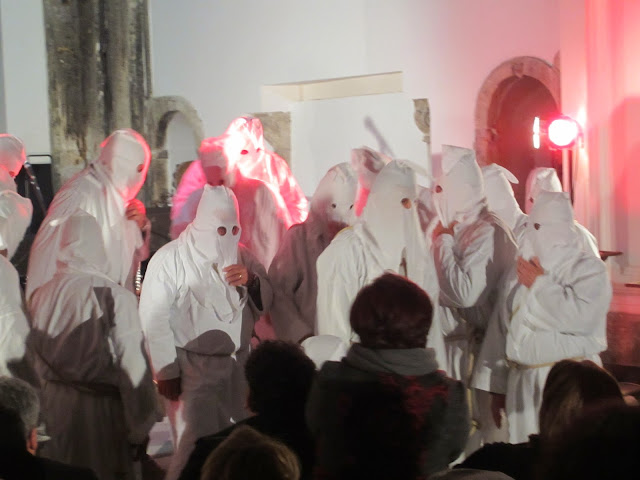 The Miserere is a traditional folk music performance evoking the pain of Christ on the Cross and the suffering of Mary, his mother.  Traditional Napoletan music, dances and songs were performed by a group of musicians with one of the city's most popular and famous singers, Maria Nazionale, taking a leading role.  While we didn't understand a word, we were moved by the beautiful singing and the passion of the performers. 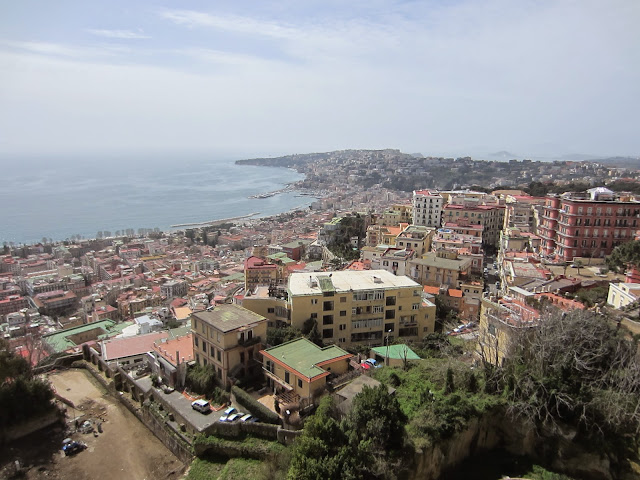 Our week in Naples was uplifting and exhausting.  Perhaps more than any of the Italian towns and cities we've visited, this place is pulsing with life and filled with contrasts.  Although it has a bad reputation for pickpocketing and petty crime, thankfully we had no trouble and once again, we found the people friendly and welcoming, and the food, spectacular.

Where we stayed:
Casa Vittoria Napoli
vicco Vacche a san Liborio, 11
www.casavittorianapoli.it
These holiday apartments are in the Quartieri Spagnoli, just off via Toledo.  They are newly renovated with lift access.  The apartment where we stayed, The Sea, number 33, was a little dark and difficult to heat as it had a loft bedroom.  While I wouldn't recommend it, I would recommend numbers 32 and 42.  Both of these apartments are on one floor and are much brighter.  They also seem to book out very quickly.

Where we ate:
Trattoria Antica Capri
via Speranzella, 110 (Close to via Toledo)
www.anticacapri.it
This family restaurant is popular with local families on Sundays.  We enjoyed the fish and parmigiana melanzane so much that we ate there twice during our week in Naples.
If you're visiting during the busy months of June, July and August it would be worth booking.  Find more reviews HERE.

Trattoria da Nennella
Vico Lungo Teatro Nuovo, 103
Another restaurant where you eat on the street in the Quartieri Spagnoli.  Fiorenza recommended this trattoria for a cheap, entertaining meal.  It was great fun and great value.  You can't book so get there early, around 7pm, or be prepared to queue.  The tables turn over quickly.
Reviews of this popular trattoria HERE.

Pizzeria Trianon da Ciro
via Coltello,
www.pizzeriatrianon.it
This is one of the most famous old pizzerias in Naples.  While the pizza itself was a little chewy for my taste, the topping of fresh tomato, buffalo mozzarella and basil was absolutely delicious.
More reviews HERE.