A long time ago in Grosio... 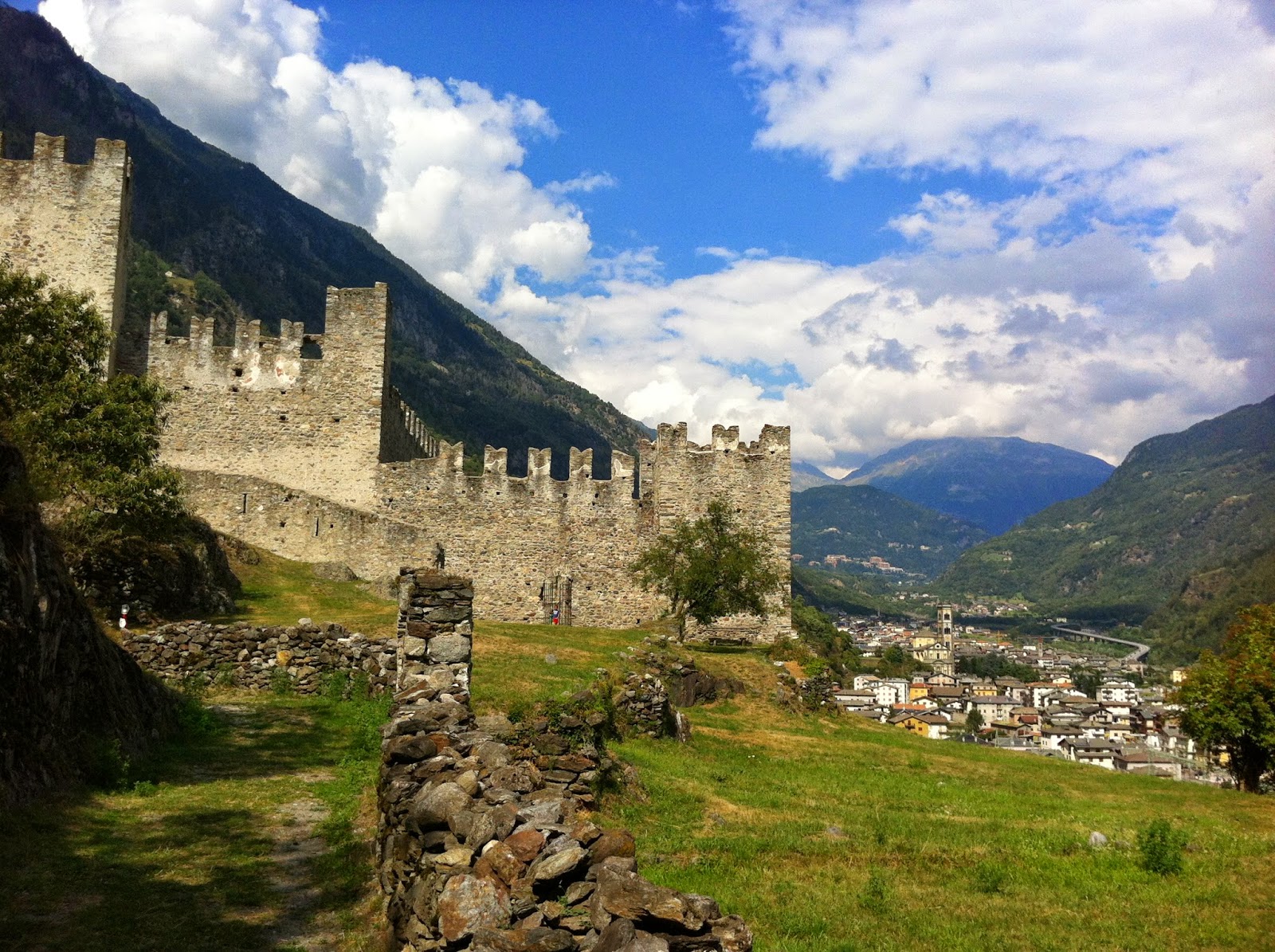 Grosio? Ever heard of it?
Probably not.
It is a small town 130 kilometres north-east of Milan in the Valtellina region just a few kilometres from the Swiss border.  Grosio is one of the many small towns that people pass through when driving from Sondrio to Bormio, as thousands do during the ski season.

I've stayed in Grosio twice, but not because of the castle ruins perched on the hillside above the road leading into the town.  The ruins of Castello di San Faustino built in 1000AD, and the connected smaller fortress of Castello NuovoVisconteo, built in the 1350 to protect an outpost of the Visconti kingdom, are the main tourist attractions in Grosio. 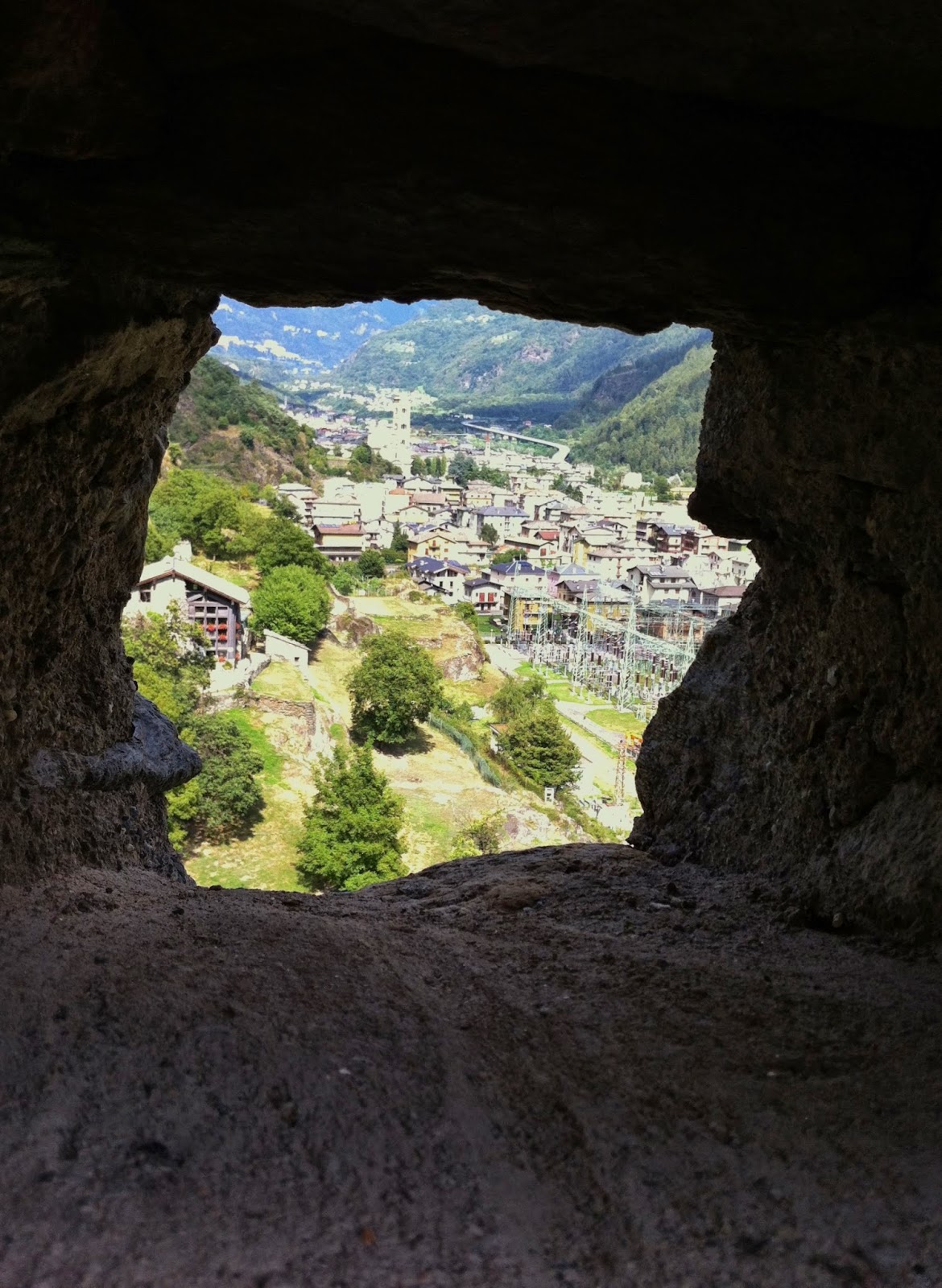 Near the castle ruins are prehistoric rock engravings known as the Rupe Magna of Grosio, the largest engraved rock in the Alps.  But, fascinating though they were, I was more interested in Grosio's recent history. 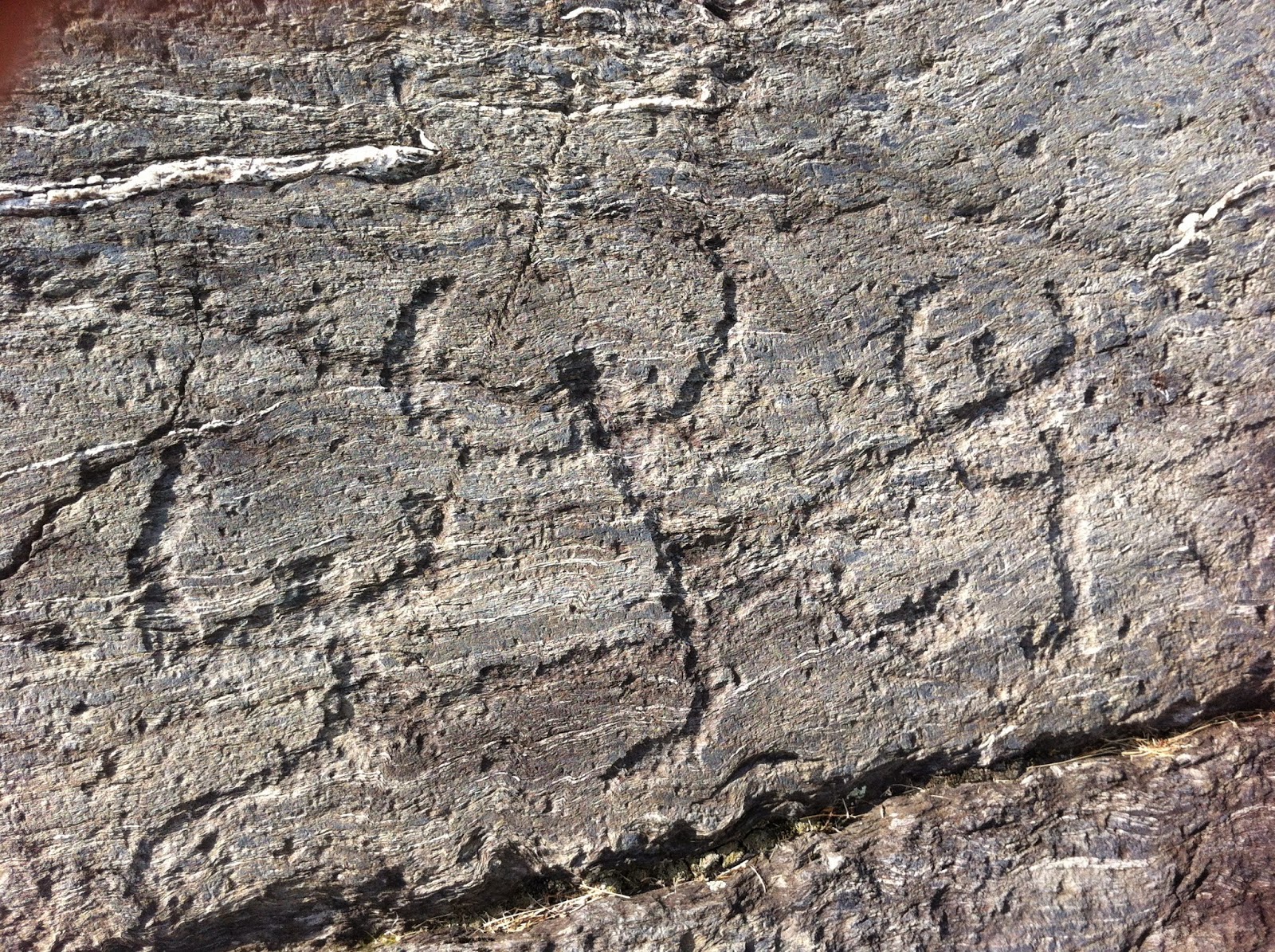 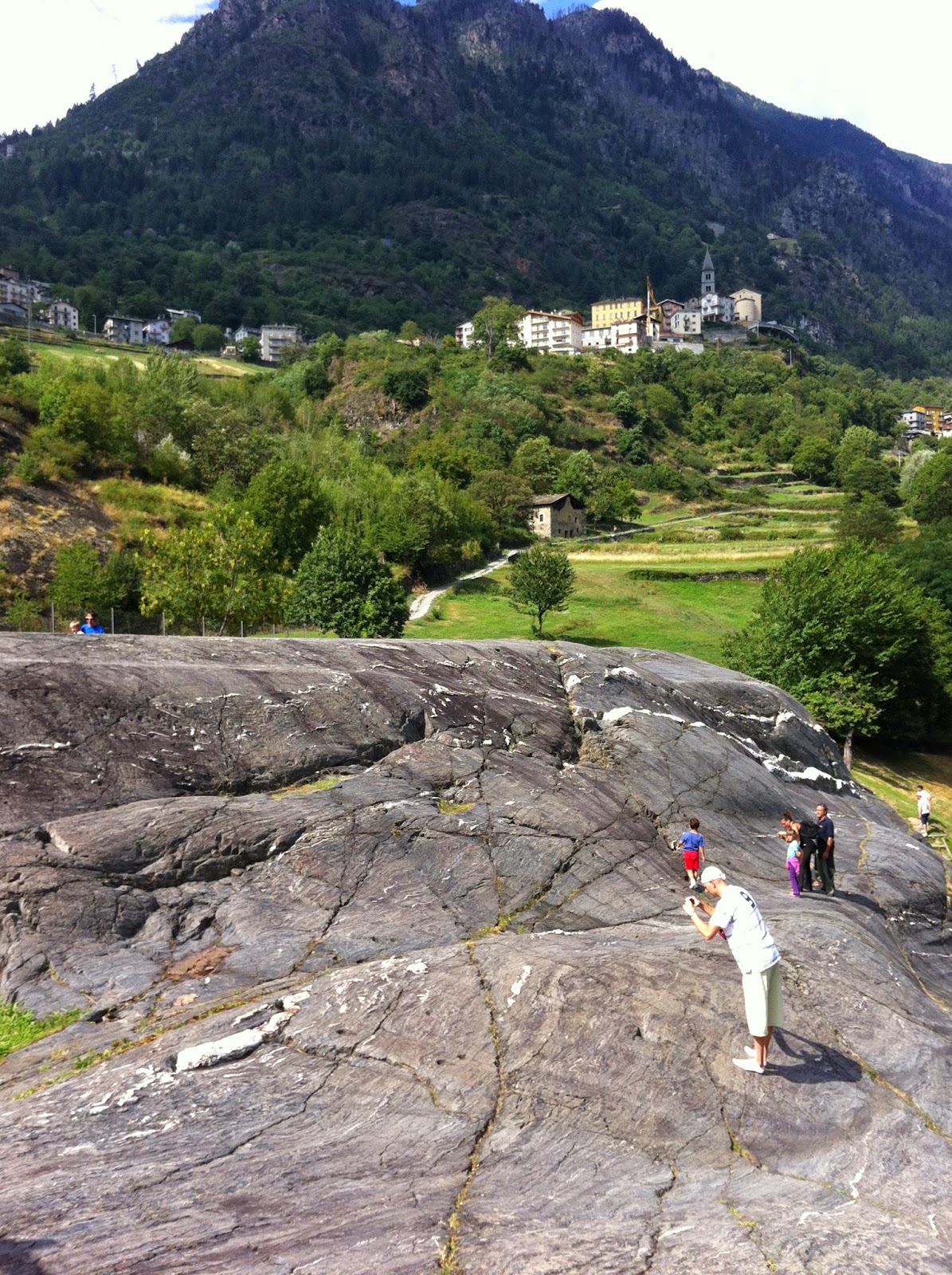 I came to this very northern part of Italy to trace the history of my mother's family - the Cecini and Sertorio families.
My great-grandparents, Giuseppe Sertorio and Maddalena Cecini, immigrated to Australia from Grosio in the late 19th century.  So in August 2013, and again in October 2014, I spent a couple of days staying in the fabulous Hotel Sassella to learn what I could about my family's Italian heritage. 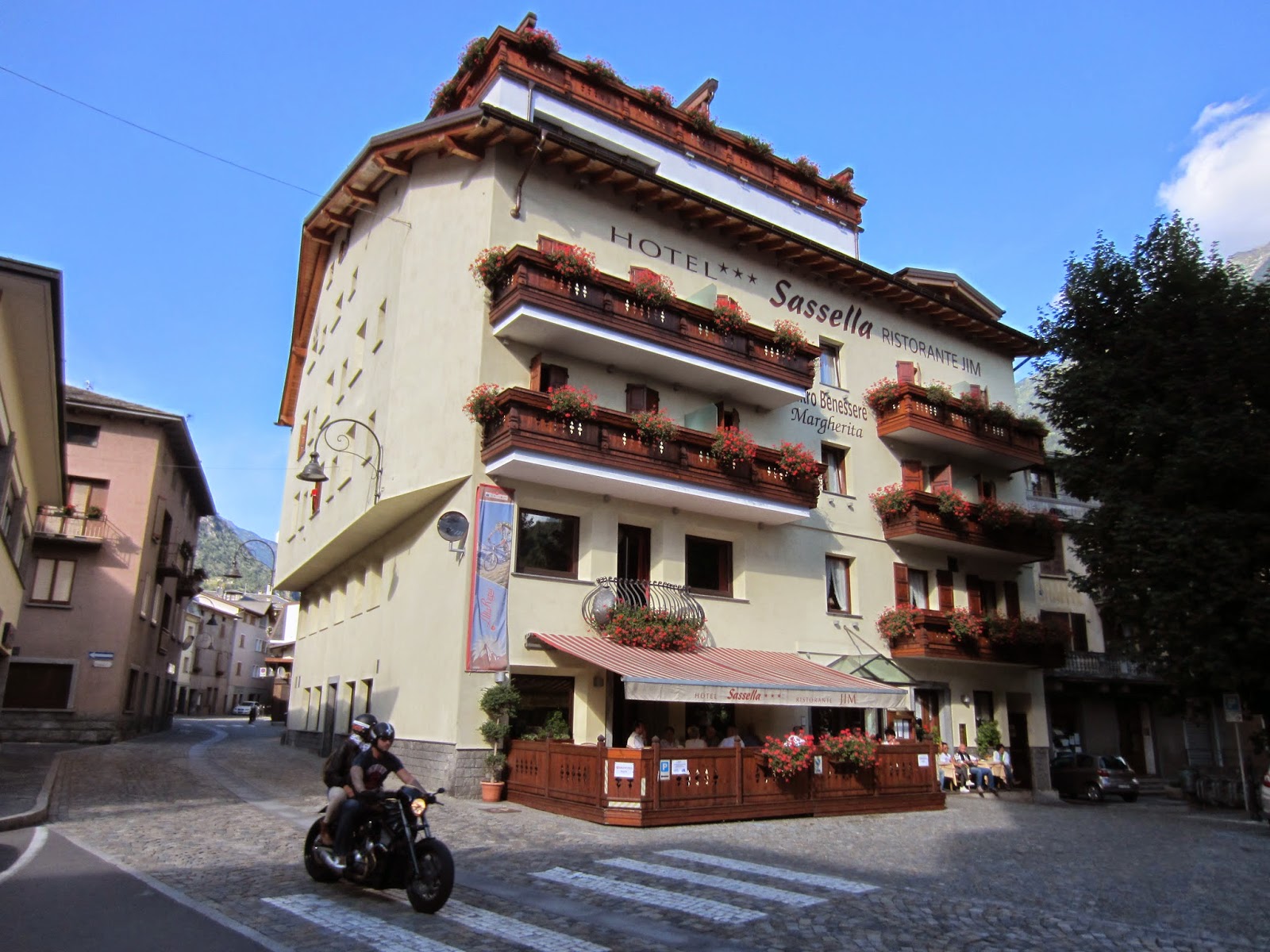 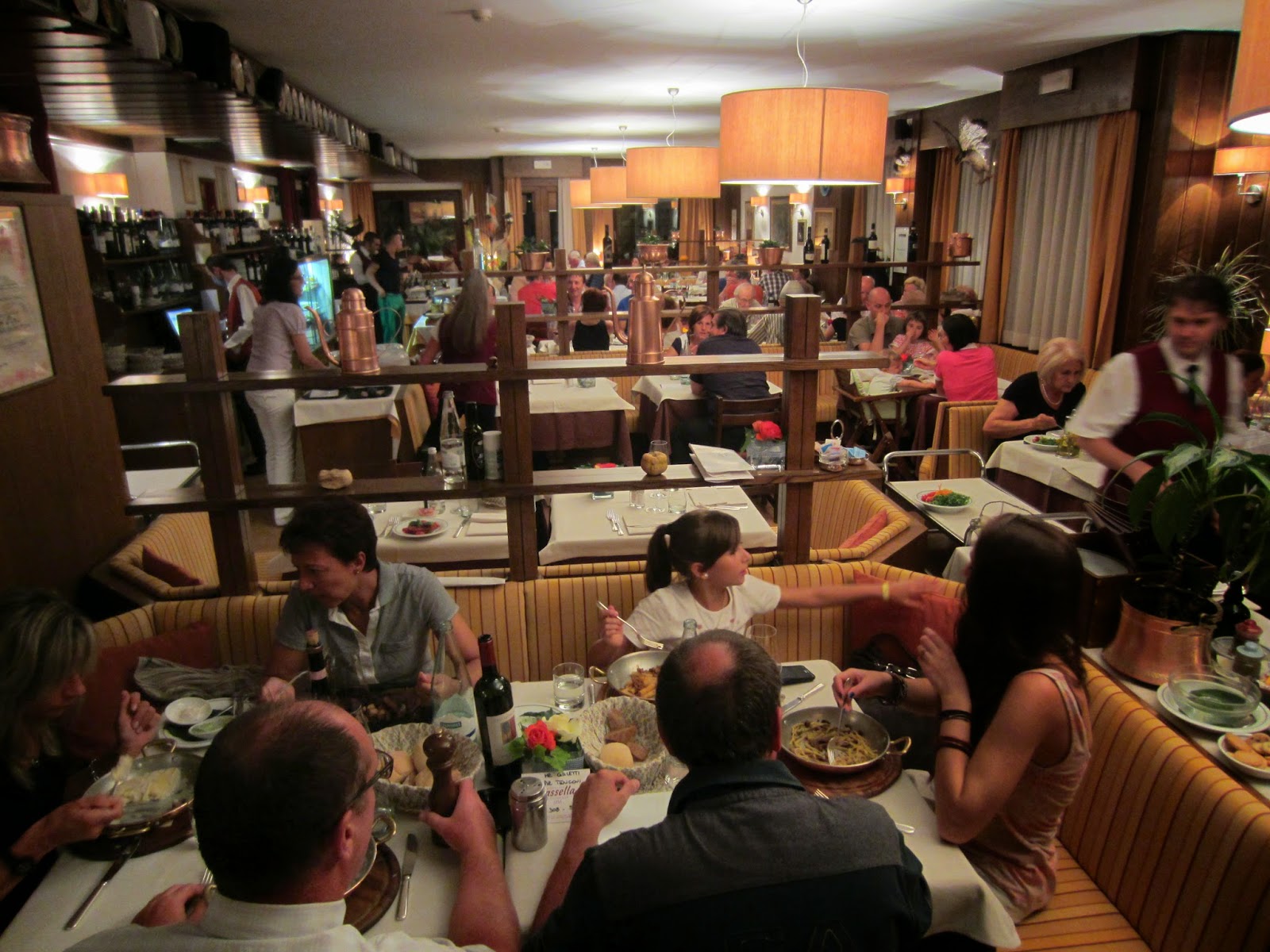 During my first visit, Stefano and I made a few inquiries about the Sertorio and Cecini families through the receptionist at the hotel front desk.  She quickly introduced me to Anne S, a delightful Australian woman whose father immigrated from Grosio to Proserpine, Queensland in the mid 1950s.  Anne reversed the long history of immigration from the Valtellina region to northern Queensland, when she met her husband-to-be while visiting her father's family in Grosio.  She has lived in Grosio since the late 1980s and met many Australians, who like me, have come to the Valtellina to trace their family history.

In Australia we know that many Italian immigrants left their homeland, particularly southern Italy, after World War II.  But long before that, shortly after the unification of Italy in 1861, there was a great exodus of Italians, mostly to America, but some travelled even further to Argentina and Australia.  Many from this first wave of Italian immigrants bound for Australia came from the north of Italy, particularly from the regions of Veneto, Piedmont and Lombardy, in particular, the Valtellina. 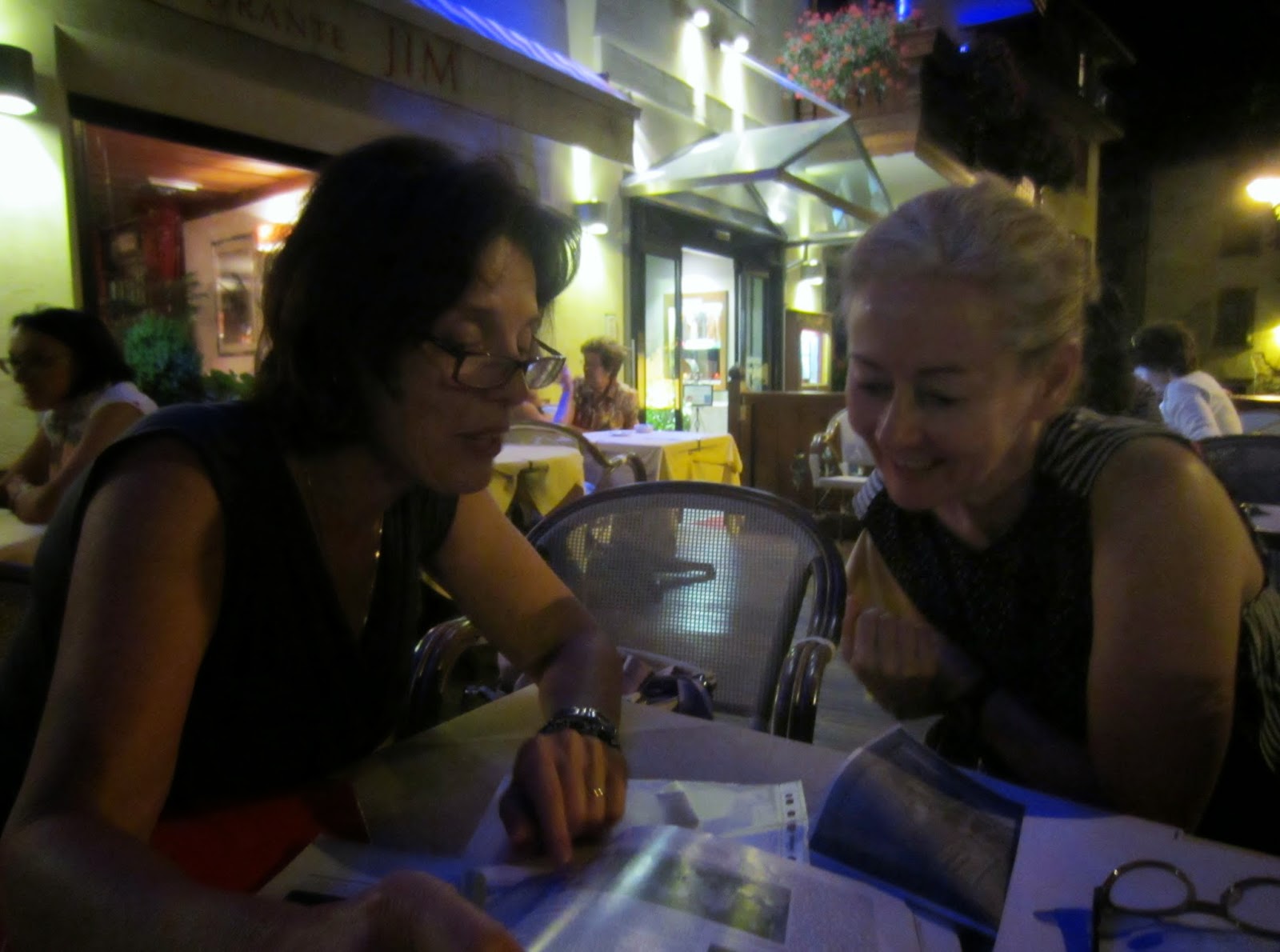 Anne has become a local authority on the history of migration from Grosio to several towns in north-eastern Australia.  This period of chain migration began during the mid to late 1800s, when many of the young men left the towns of the Valtellina to escape the terrible poverty that had resulted from an agricultural crisis of repeated crop failures, particularly the grape harvest which had failed for 14 consecutive years from 1860. 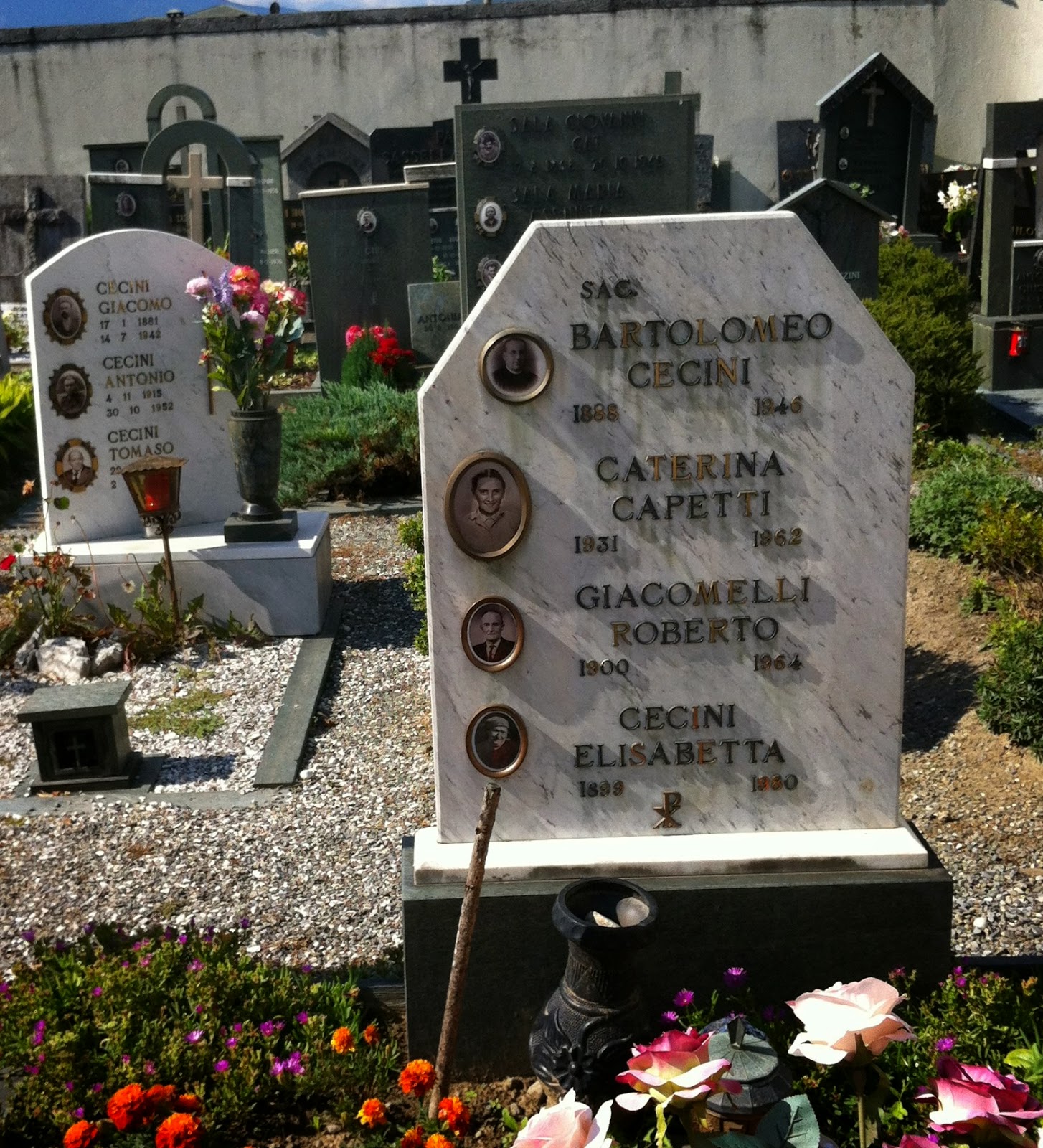 It was during this time that my great-grandmother left Italy.  Anne was able to tell us a great deal about my great-grandmother's family.  Maddelena Cecini and her parents, Pietro and Nora, left Grosio sometime around 1880, when Maddelena was 12 years old.  Anne explained that in Grosio there are six family names which originate from the town, but there are many branches of these six families, so they are known by 'nicknames - sopranome'.  She was able to tell us that I was from the 'Scoben' branch of the Cecini family.  When Stefano and I wandered through the cemetery in Grosio, it was apparent that Cecini was indeed a common name in the town. 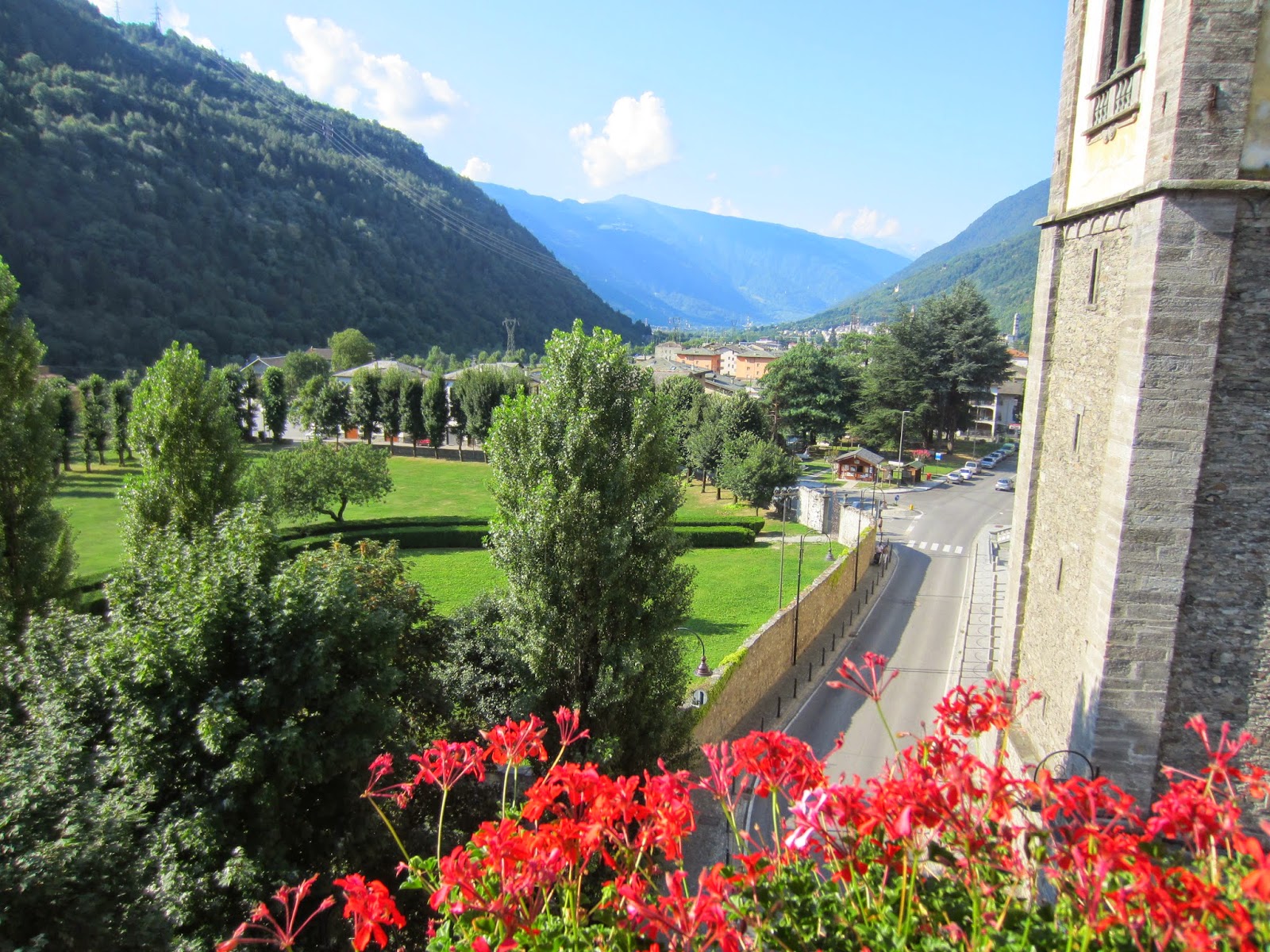 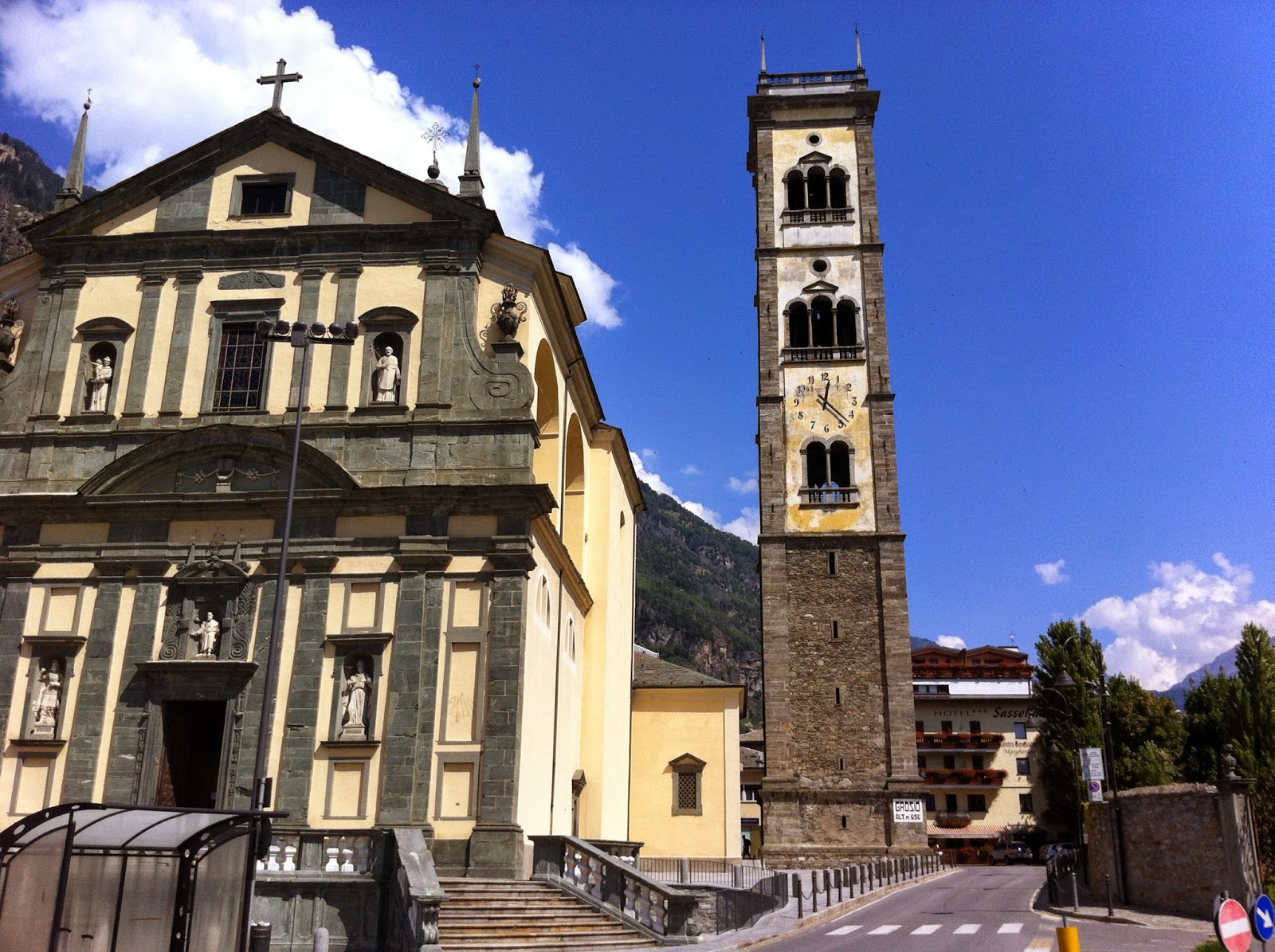 I returned to Grosio a couple of months ago with my sister, Felicity.  Once again I contacted Anne and she very generously met us and took us on a walking tour of Grosio, as she had done with Stefano and I in the previous year. 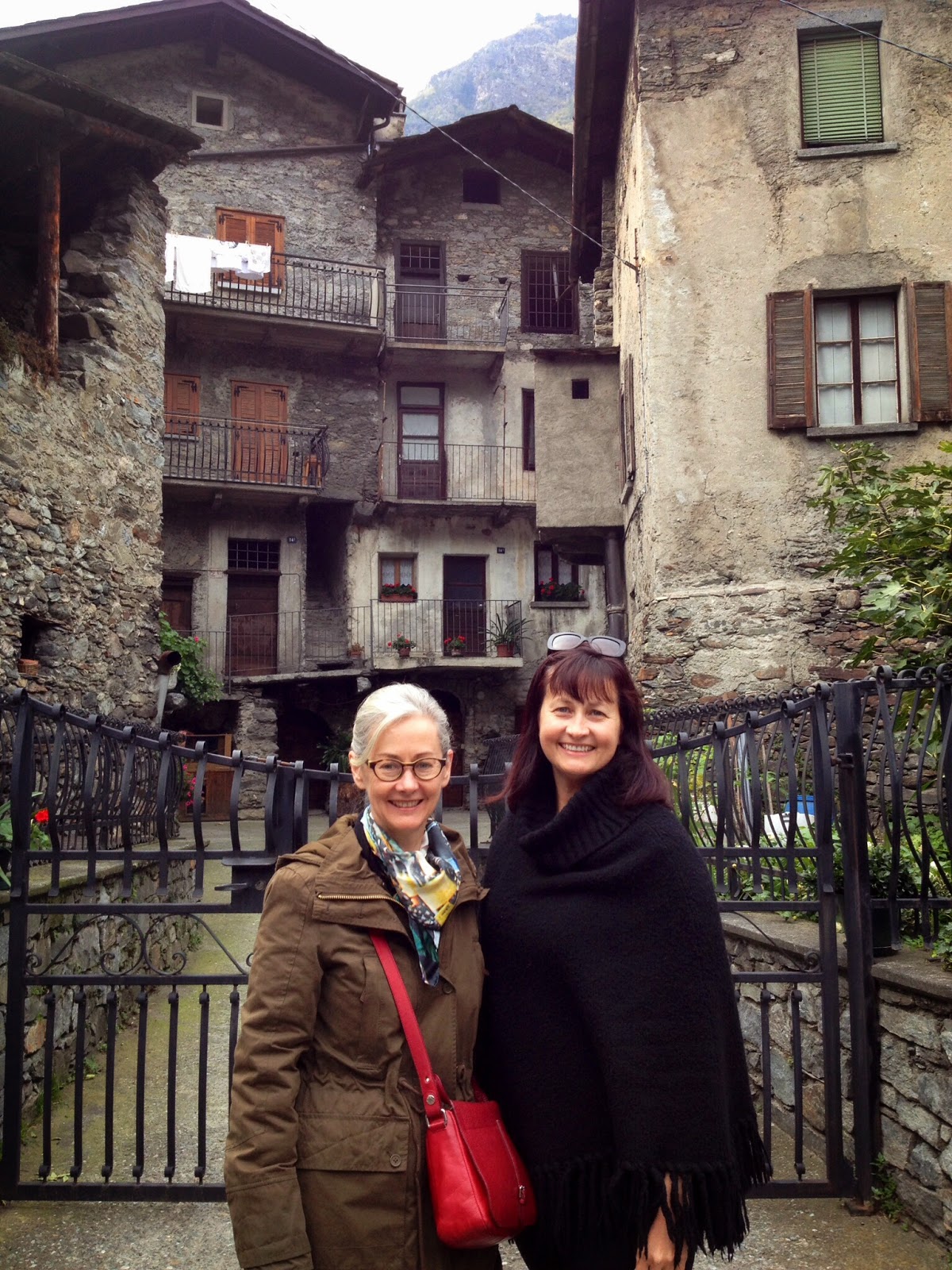 Anne showed us the old house where our great-grandmother, Maddalena Cecini would have lived. She explained that the family would have been very poor and would have probably lived in just one, or two rooms, of this old multi-storey house, along with their extended family.  From our conversation it seems that there are still 'Scoben' Cecini living in this same house.  It was amazing to walk along the narrow lanes lined with old houses, some restored, others crumbling, and to see the old wells still in use today, knowing that over 120 years ago my great-grandmother would have walked these same streets to fetch water for her family. 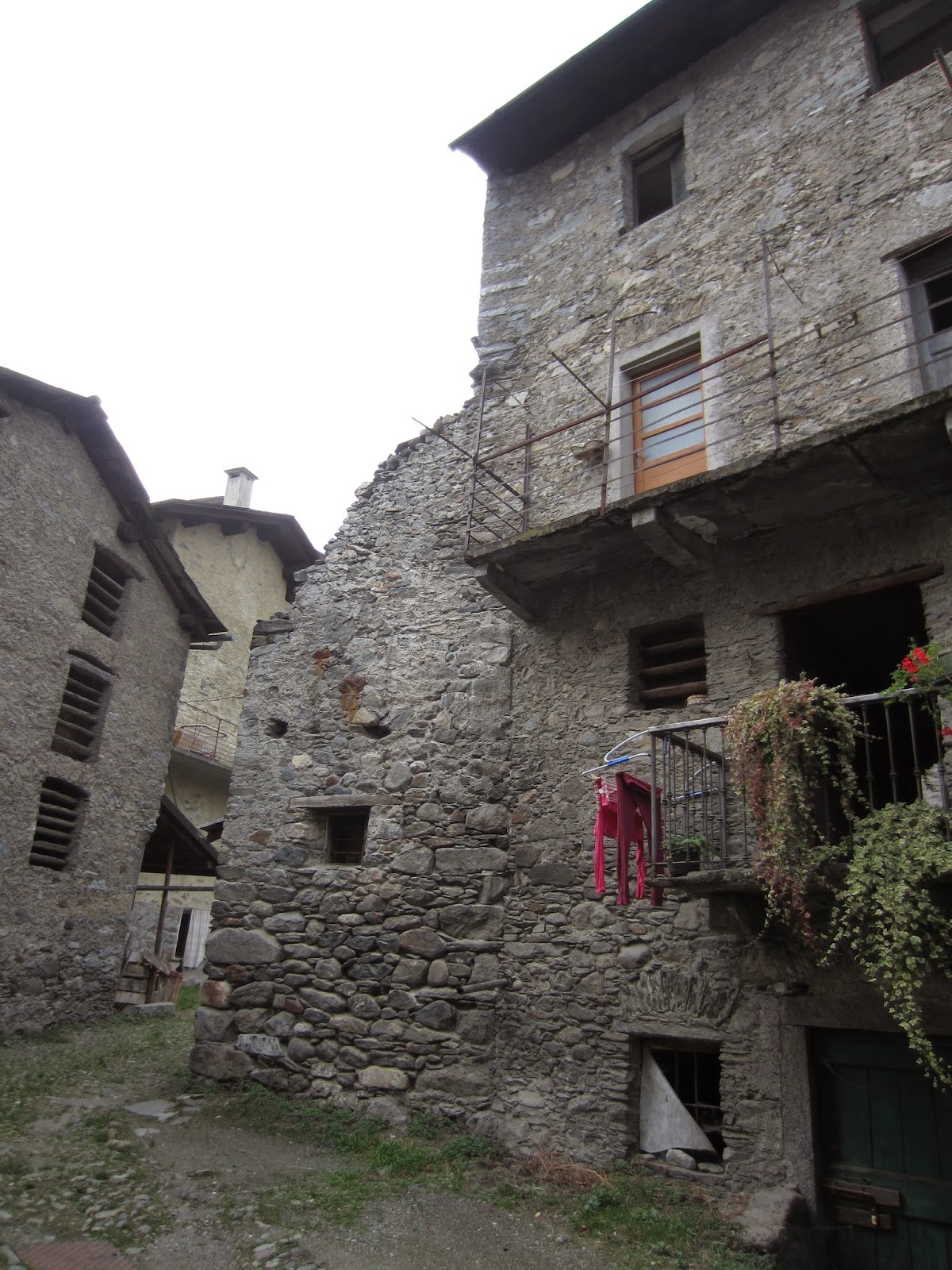 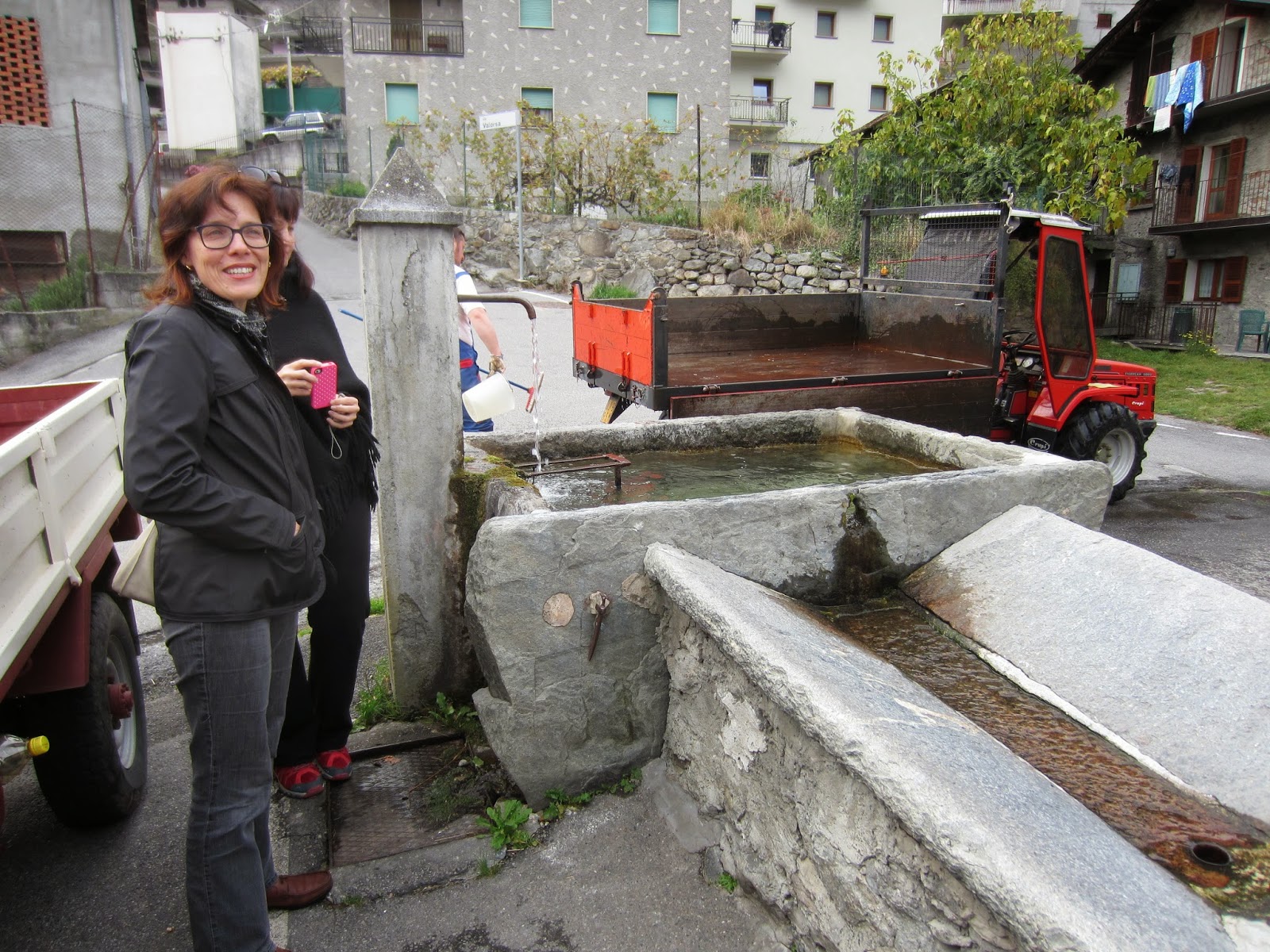 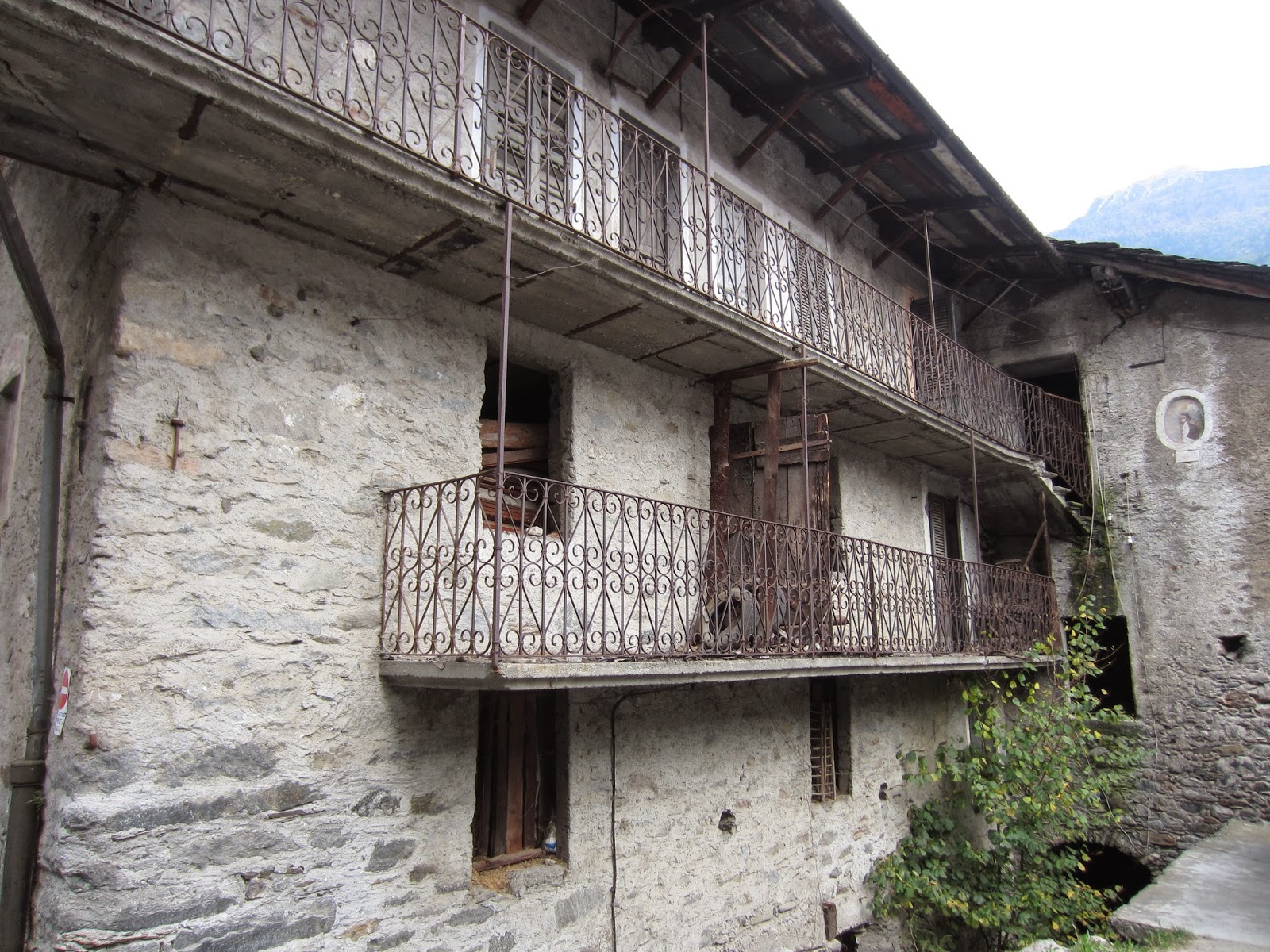 Then Anne offered to take us for a drive into the mountains where many Grosio families still have "summer houses".  As it was the middle of autumn, these mountain houses were being closed for the winter, so there was a special celebration over the weekend to mark the end of the summer. 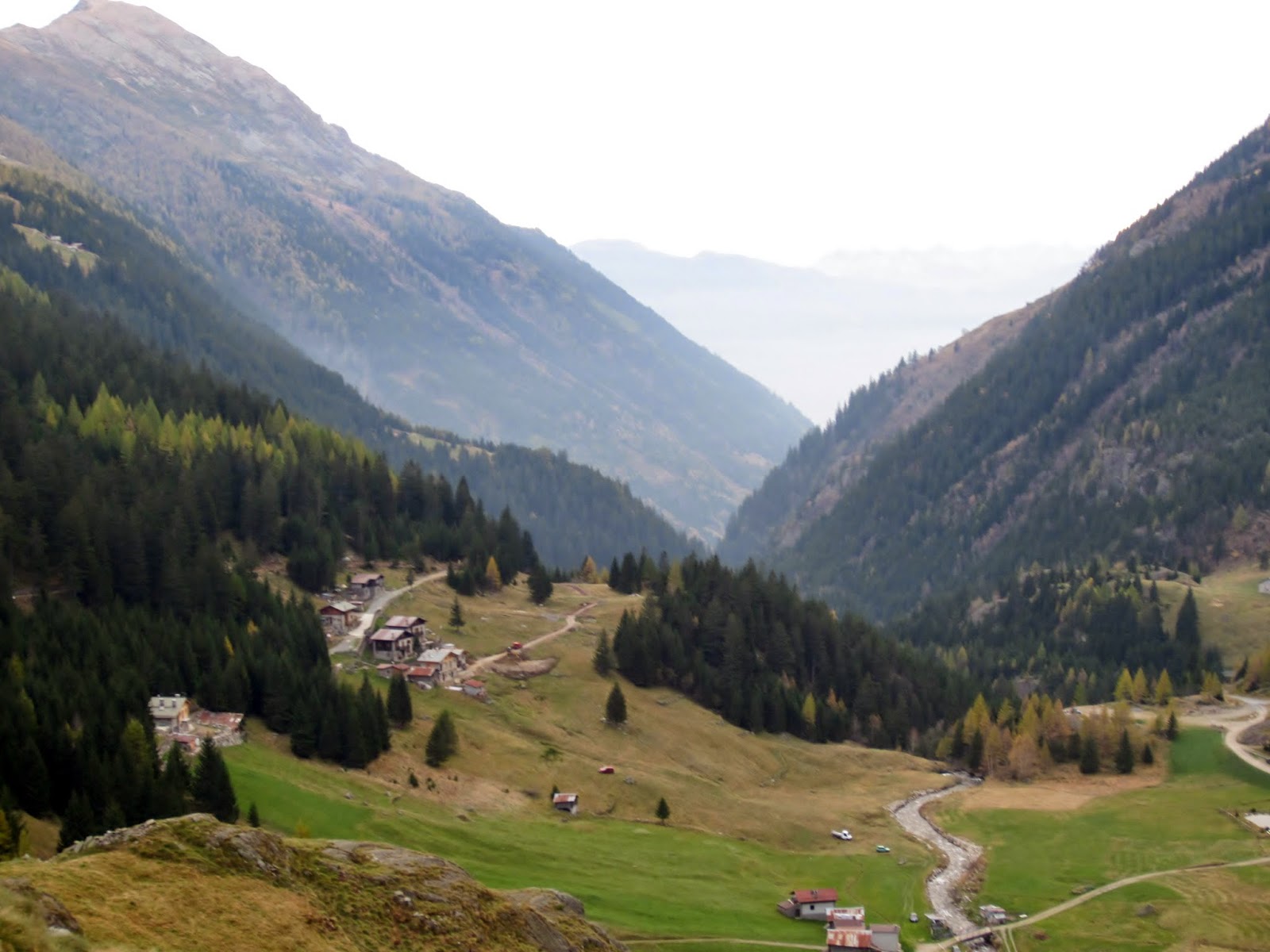 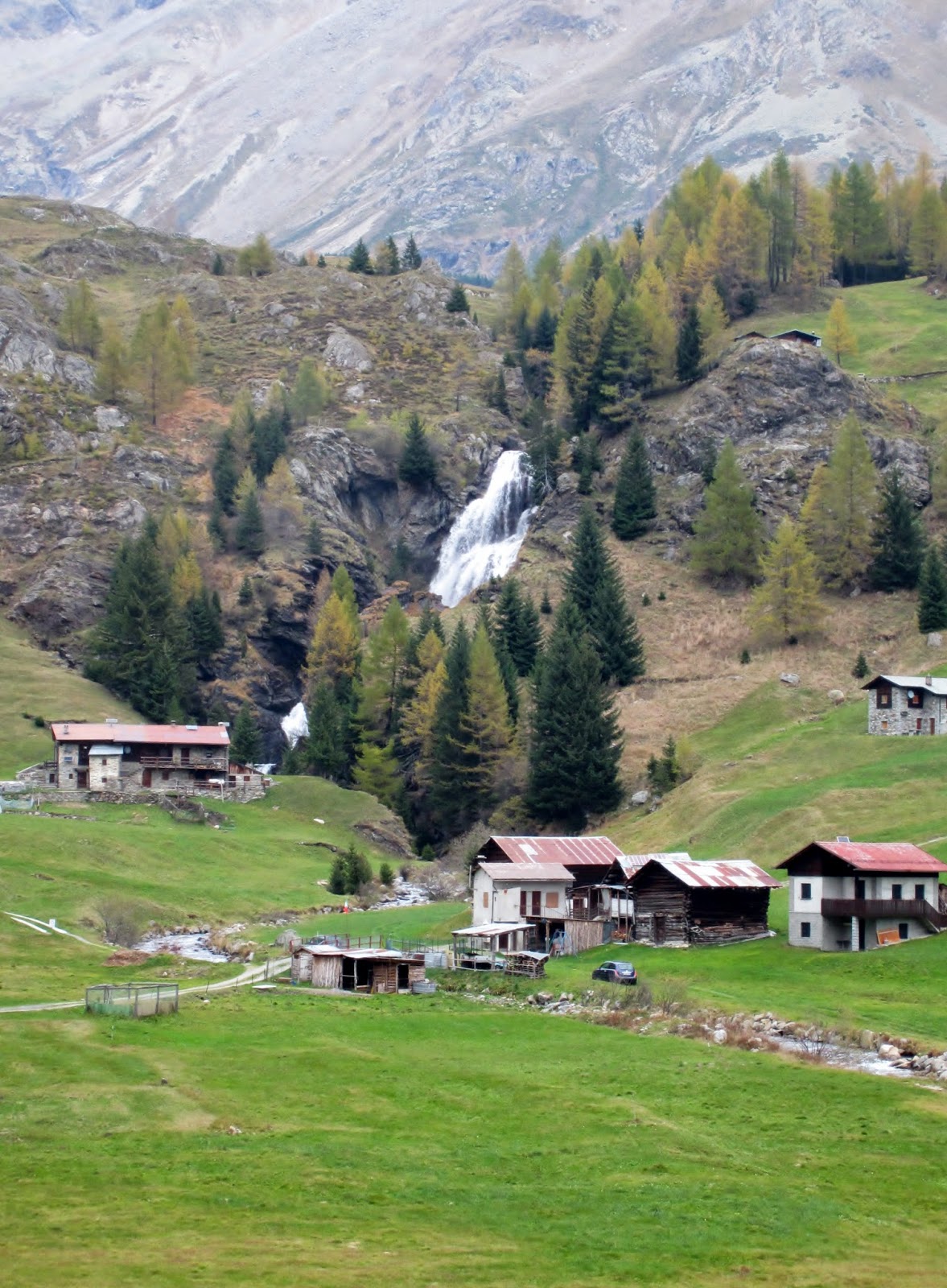 Traditionally they were small huts used by the farmers and shepherds during the spring and summer, when they took their animals up to the high pastures to graze.  These days, very few people still keep animals, although we saw several small trucks bringing down goats and sheep, as we drove up the steep winding road.  Now the houses are like 'weekenders' for the families who live down in the valley.  Interestingly, the community decided not to connect to the electricity grid, nor to commercialise the area.  It remains as it has always been, a summer refuge in the mountains. 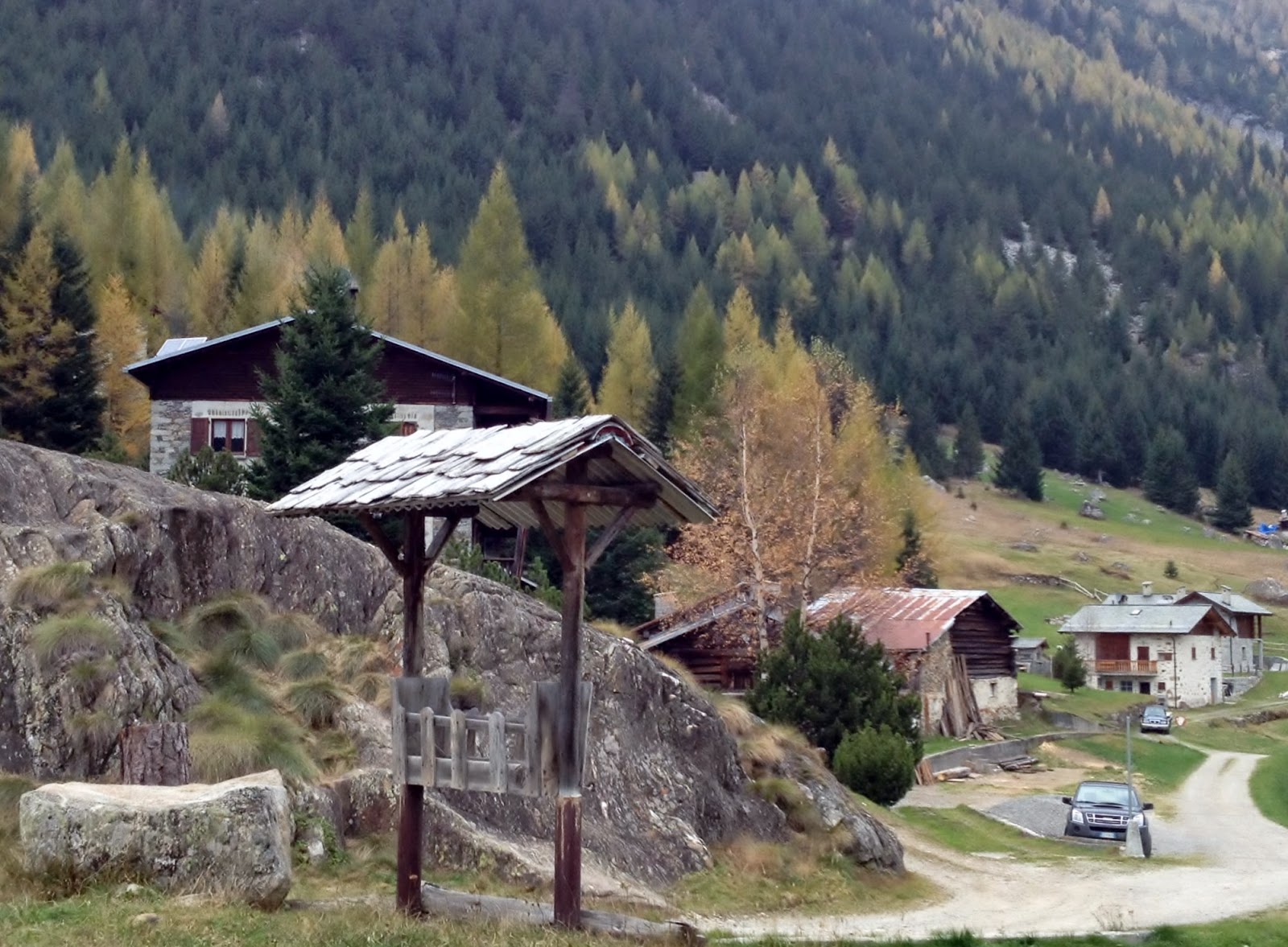 At the local refugio Anne introduced us to many of the locals.  It seemed that almost everyone was either named Cecini, or married to a Cecini!  Felicity and I thoroughly enjoyed the warm welcome we received, even being told that we looked like Cecini. 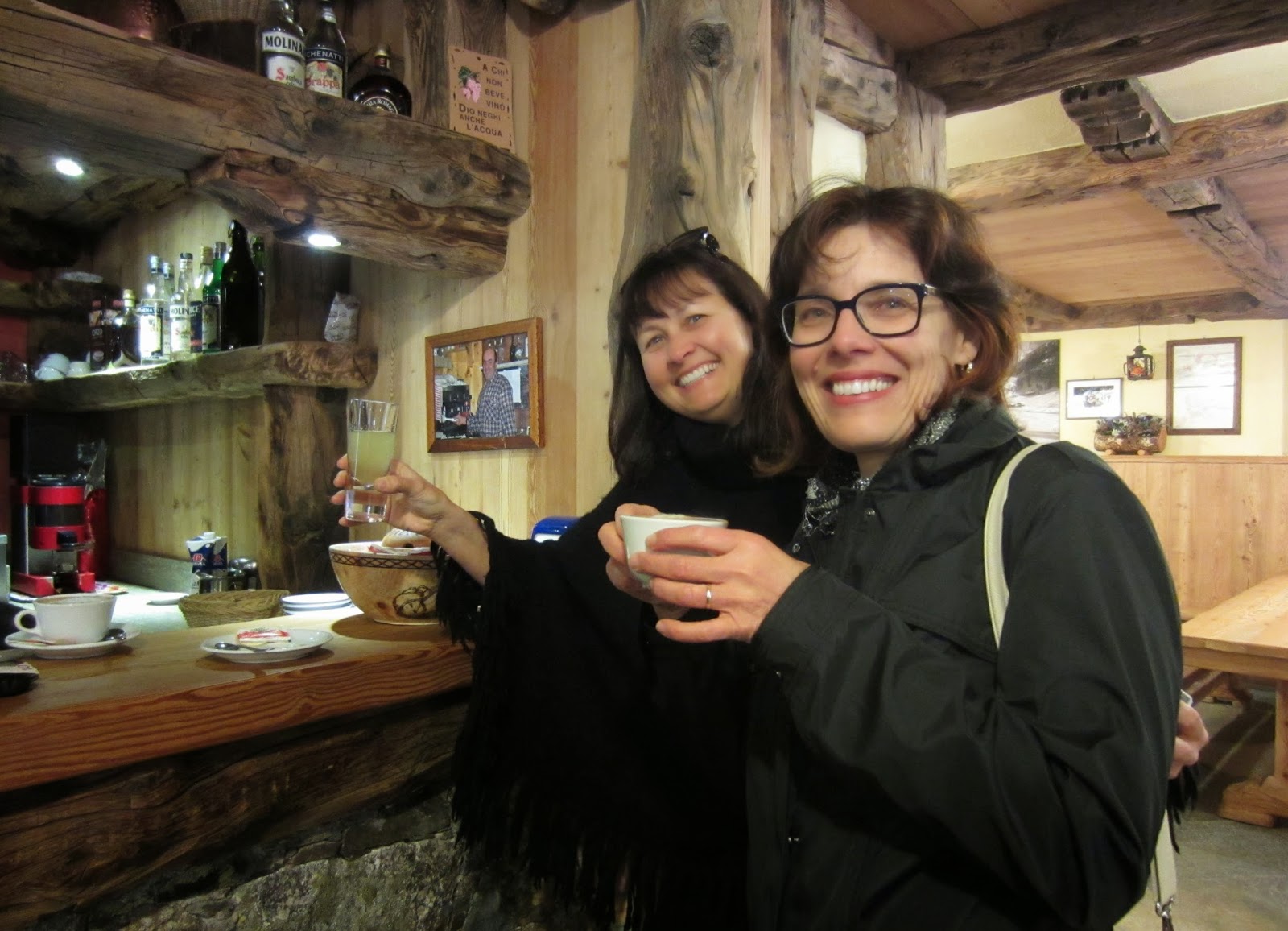 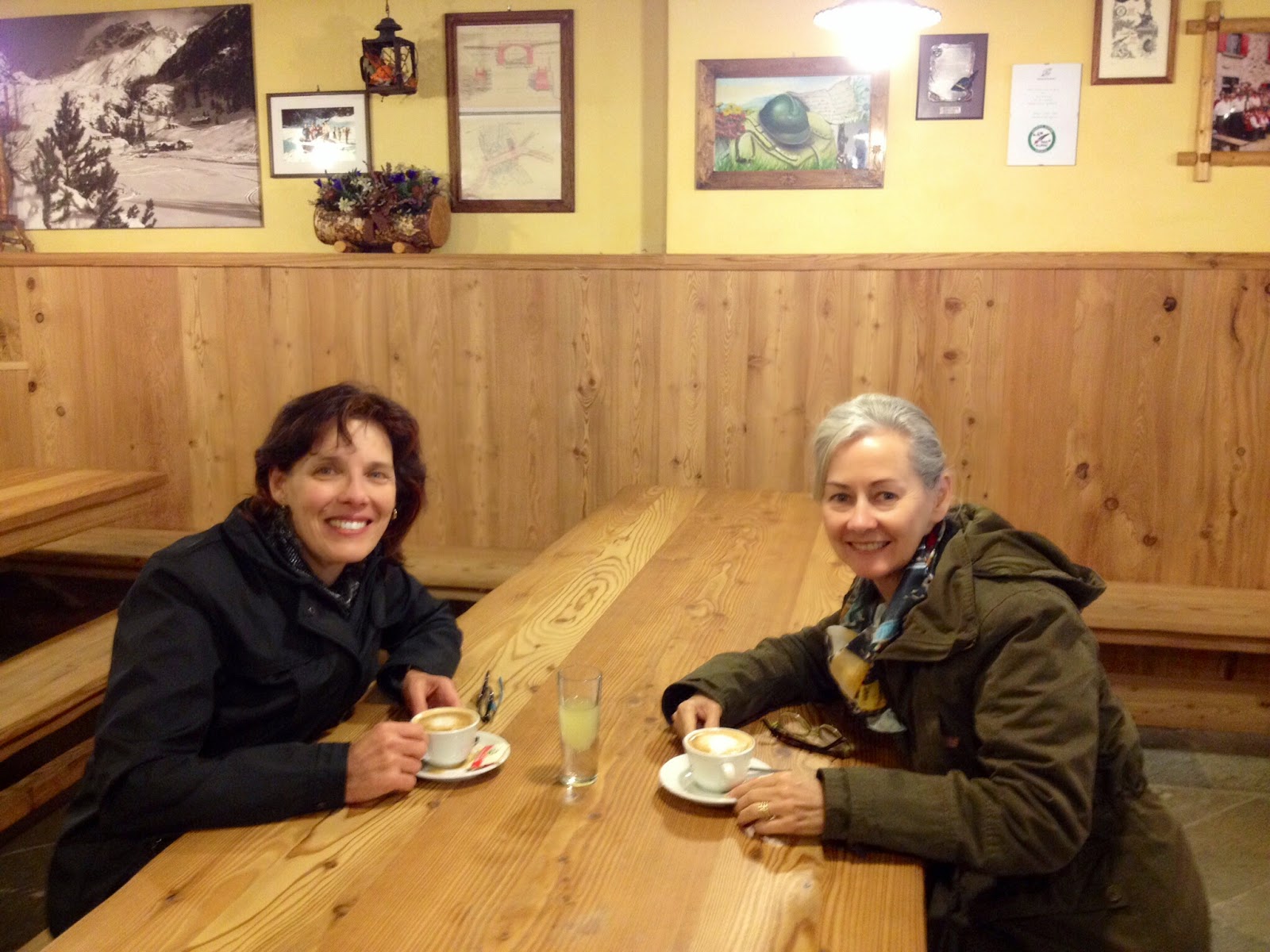 Anne didn't know if our ancestors would have used these mountain huts, but she thought it was possible as the Cecini would probably have been 'contadini'- farm workers.

She explained that she knew less about my great-grandfather, Guiseppe Sertorio, because he was not from Grosio.  Sertorio is not a Grosio name.  Anne had done some previous research and learned that my great-grandfather had come from Bianzone, an even smaller town further down the valley, south of Tirano.  He immigrated to Australia in his early twenties, following others from the Valtellina to Ravenswood in northern Queensland.  It was there that Maddelena and Giuseppe were married.

Apparently they became publicans in Charters Towers running a hotel called the St George.  They must have been reasonably successful because in 1905 Guiseppe and Maddellena returned to Grosio with their three young children, Mary, Ellen (my grandmother) and Joseph.  Their reason for returning to Grosio is unclear, perhaps they returned for a holiday, or perhaps like many immigrants of those times, they returned home with money to buy land and the intention to stay.

We will probably never know.  Anne went on to describe that at the time my great-grandparents visited Grosio in 1904-05 there was an outbreak of tuberculosis.  Sadly my great-grandfather died in Grosio on the 15th February, 1905.  There is a record of his death in the Bianzone parish records which Anne had kindly photocopied, but his grave no longer exists.  In this part of Italy, graves are only kept for 20 years and then the remains are either interned in a smaller box and placed in a family tomb, or added to the cemetery ossuary.   My great-grandmother, a widow at only 27 years of age, returned to Australia with her three young children and settled in Hughenden, Queensland, where she became the publican of the Great Western Hotel. 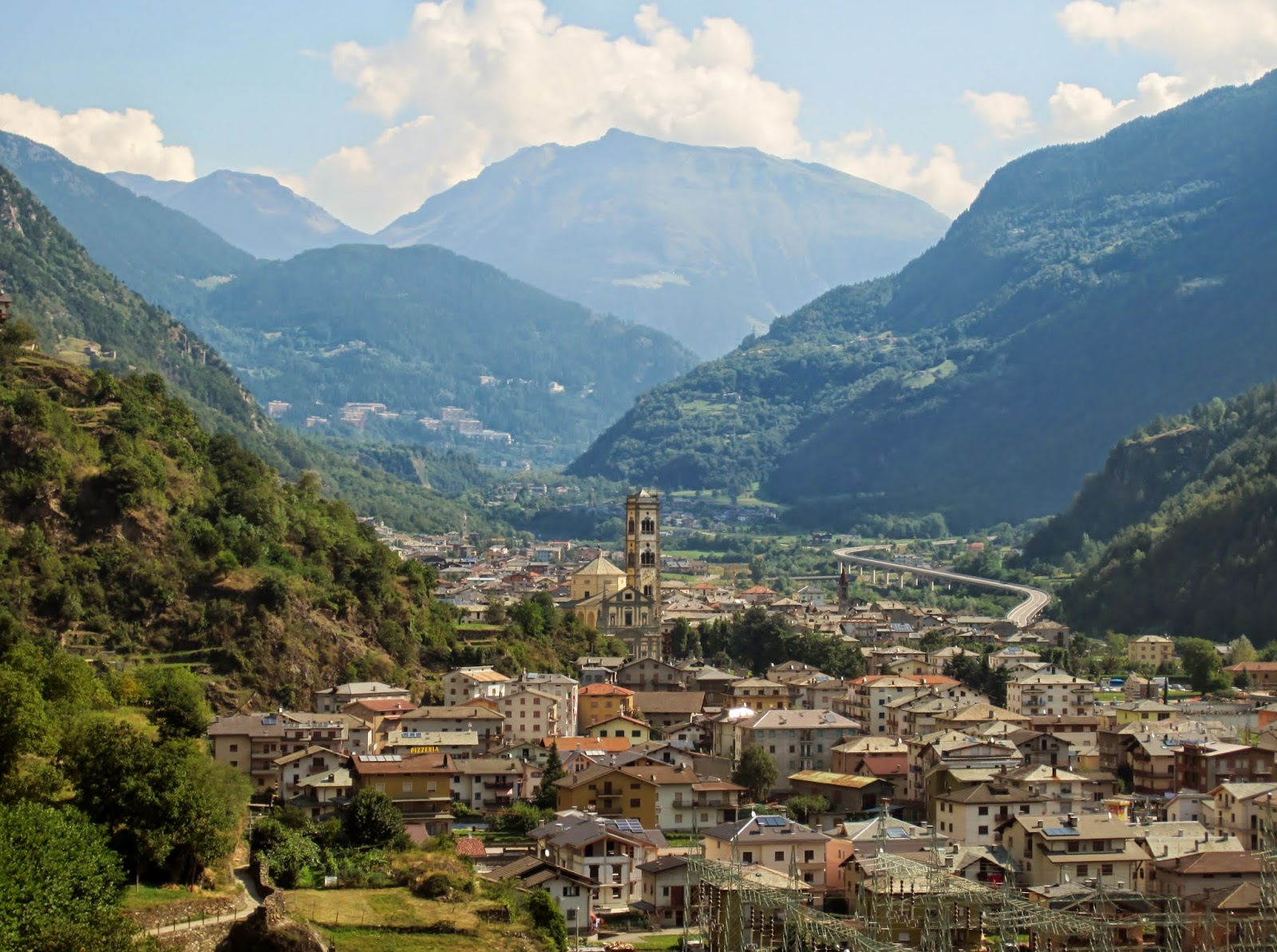 As we left Grosio, Felicity mentioned how much she had loved visiting this beautiful area of northern Italy.  I agreed.  I'm sure we will return again as Grosio has captured our hearts.  Perhaps it's in the blood?
Where we stayed:
Hotel Sassella
This is a really lovely hotel with a fabulous restaurant and wonderful "Wellness Centre".  If you ever pass through Grosio it is worth a stop.  Reviews of Hotel Sassella CLICK HERE
Where we ate:
Rifugio Eita
For more information about having lunch or trekking from the refugio CLICK HERE